Anthony Quayle has won the 2015 Keperra Bowl with a two shot victory over Austin Bautista and Kiran Day at the Keperra Country Golf Club west of Brisbane.

Quayle fired rounds of 66-72-71-68 to finish at 11-under-par with the victory adding to his Tasmanian Open title. Quayle also has the 2015 Pacific Northwest Men’s Amateur (US) title to his credit. 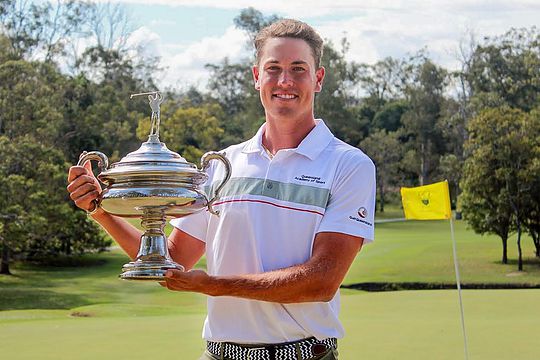 A former member of the Hills International College and Golf Academy, Quayle is originally from Port Macquarie before his family moved to Queensland where he’s now based at the Sanctuary Cove Golf and Country Club.

Quayle is a player to watch over this Australian summer particularly with a number of main amateurs either turning or are about to turn professional.

Final round leader Charlie Dann from Pelican Waters finished in equal third place after a solid back nine with only one bogey to finish 73.

Third place was also shared with defending champion Troy Moses from Bonnie Doon, Andrew Schonewille from Yarra Yarra, Blake Collyer from Metropolitan GC), Mitchell Gannon from Bonnie Doon and Daniel Gale from Castle Hill, all finishing the tournament at 8 under.