Heading into the final day with a seemingly unassailable six-shot lead, Anthony Quayle shrugged off a nervous Sunday to win the Queensland PGA Championship by two shots over Daniel Gale.

The 27-year-old double-bogeyed his opening hole before grinding back shots with birdies at the 6th and 8th holes to make the turn at even par. However another bogey at par-4 12th saw him card a disappointing 73 against Gale’s near tournament-winning 66. 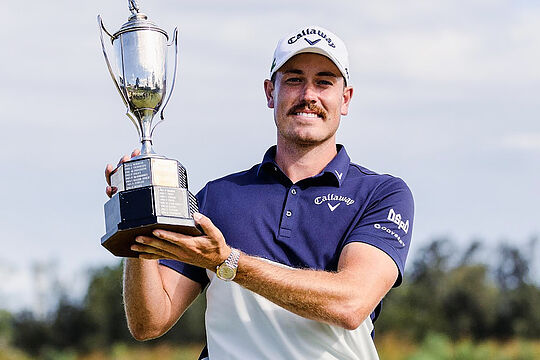 “It was more stressful than I thought it would be but it was a lot of fun,” said Quayle of his rollercoaster round.

“I was a little bit surprised my lead had gone that quickly. I got off to a terrible start and Justin [Warren] was pushing really hard. He didn’t miss a shot for the first five holes and then I hit a 5-iron from 180 metres to two feet (at six) and that settled me down a little bit.”

“I hit a few more shots that came out more how I was trying to hit them and that I had more control of my ball. I hit a really good shot into eight and holed a nice putt and after that I was pretty settled for most of the day.”

Sunday’s victory marks the Gold Coaster’s second title in the Sunshine State having claimed the Queensland Open over then-amateur Jack Thompson in 2020.

Brisbane’s Louis Dobbelaar placed outright third place for the second week in a row closing on 7-under with Josh Armstrong and Justin Warren sharing 4th place and 6-under.

Quayle, who has played the Japan Golf Tour since 2018, will move to fourth place on the Australasian PGA Tour Order of Merit thanks also to a solid 6th place result at last week’s Australian PGA Championship after recovering from a bout of COVID in the week prior to the tournament.

Next up on the local calendar is the $150,000 TPS Victoria at Rosebud Country Club on Victoria’s stunning Mornington Peninsula. The second staging of the event will tee off on February 3rd with Brad Kennedy lining up as defending champion.