Following a rollercoaster final round at Pelican Waters Golf Club, the Queenslander has won his maiden Professional tournament in a playoff against amateur Jack Thompson. 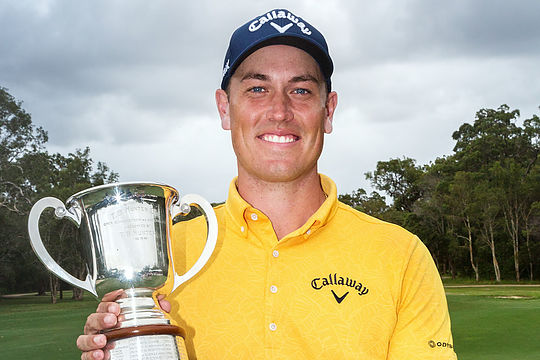 The 25-year-old carded rounds of 67, 69, 67 and 70 for a 15-under 273 total but it was a regulation par at the first playoff hole that saw Quayle win his first ISPS HANDA PGA Tour of Australasia title.

“It feels incredible. I’ve given myself a few chances recently and haven’t been able to pull it off and the feeling of frustration or regret walking off the 18th green is definitely not present at the moment,” Quayle said.

“I felt for a while that my first win would be a pretty difficult one to get done and maybe it was difficult because I thought it into reality.”

“I showed myself today what it takes to win and it doesn’t have to go perfect. You can make quite a few mistakes and still have a chance to win. I think it’s a pretty good lesson for me today.”

After starting the final round tied for the lead at 13-under alongside Thompson and James Anstiss, Quayle moved ahead of the pack early with birdies at the first, third, fifth and seventh holes.

The back-nine proved more of a challenge, however, when he fell victim to a bogey, double-bogey combo and the 11th and 12th holes.

Despite admittedly ‘giving myself a bit of a serving’, Quayle managed to turn his mindset around thanks to his coach and caddy for the week, Ken Berndt.

“KB my coach helped me out a lot,” Quayle said while also thanking his parents and wife Sofia for their support.

“We got to a few ahead and then went bogey, double and Jack went par, birdie and all of a sudden he was one ahead and was playing really nicely.”

“To catch him I was going to have to play really good golf. KB had a chat to me; got me to compose myself and I barely missed a shot coming in the last five holes.”

“He was saying to me as we went to the first playoff hole I didn’t sign up for this extra work, but I wouldn’t be here without him. He’s coached me since I was 14, constantly helping, incredibly selfless, just always there to help you out.”

The Japan Golf Tour player’s record boasts a number of top-10 finishes worldwide including second place at the 2018 Fiji International but his first win, made in his home state, will stick in his memory forever.

The moment is one Low Amateur Honours winner Jack Thompson will remember for years to come but the disappointment of a narrowly missed win was front of mind after the final putt dropped.

“To be honest I’m pretty gutted. I probably should have grabbed it on the last there, I had about a 12-footer for birdie but at the end of the day I’m still pretty rapt to get Low Am but it would have been nice to come home with the trophy,” Thompson said.

“I really wanted it. I’ve had a few close calls in amateur events and carried on to here. I’m still proud of myself to even take it to a playoff.”

Brad Kennedy fought back in the final round to finish tied for third alongside Jake Higginbottom at 13-under the card. Steven Jeffress, amateur Josh Armstrong, veteran Richard Green and Kiwi James Anstiss tied for fifth place at 12-under.

Quayle takes home the winner’s share of the $137,500 prize purse, $20,625, as well as Official World Golf Ranking Points and full exemption onto the ISPS HANDA PGA Tour of Australasia until the end of the 2021 season.

The Queenslander will now travel to Queenstown for the ISPS HANDA PGA Tour of Australasia and Asian Tour co-sanctioned 101st New Zealand Open which will tee off at Millbrook Resort & The Hills from Thursday 27 February.