German-born golfer David Klein has bounced back from a frustrating recent injury layoff in perfect style to claim his first PGA Tour of Australasia win at the Coca-Cola Queensland PGA Championship in Toowoomba.

The New Zealand resident was victorious in a one-hole playoff against Queensland’s Tim Hart, who shot a blistering final round of nine-under par 61 around the City Golf Club, after the pair had tied at 15-under 265 at the conclusion of regulation play. 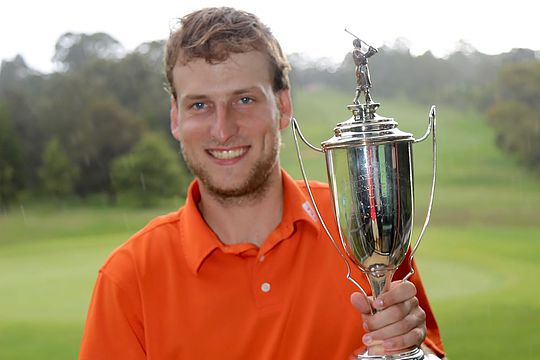 In the playoff, Klein was flawless after Hart found trees with his tee shot, setting up a perfect line to the pin to set up a winning birdie putt.

“I set myself a goal to go 6-under, two on the front and four on the back. I started with a birdie on one and two and then just played pretty solid.”

A stroke out of the playoff on a congested leaderboard in third place were Christopher Wood (QLD), Darren Beck (NSW) and overnight leader Kristopher Mueck (VIC).

With this win, Klein receives $18,750 and Official World Golf Ranking Points, plus full exemption on to the PGA Tour of Australasia for the remainder of this season plus a further two years.

The PGA Tour of Australasia now breaks for a month before heading north to Papua New Guinea for the South Pacific Export Radler PNG Open from March 21-24.