Queensland has produced a remarkable victory in securing their third Australian Interstate Teams title in four years by defeating New South Wales 4.5 to 3.5 at Tasmania Golf Club in Hobart.

It was a final where victory could have fallen into either team’s hands, yet young gun Jake McLeod playing number 7 for Queensland secured a stellar 1-up victory over Cameron Davies to give his team the needed four match win and victory for Queensland.

“It was an all-round team effort,” said Matthew Toomey, manager for Queensland.

“All the guys played exceptionally well, but Jake [McLeod] and Cameron Smith were just fantastic.”

Smith certainly was the stalwart for the Queensland side, not loosing a match in the five round series before the final and was at one stage thirty-three under for seventy-six holes. 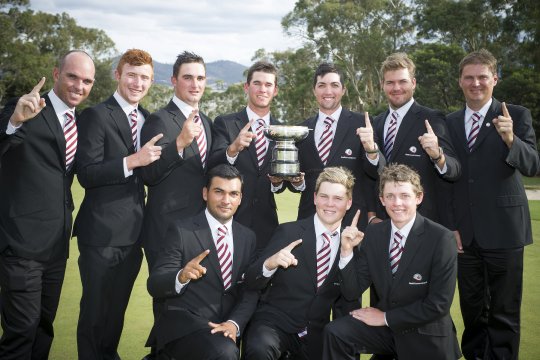 “But I also think it was the depth of our team that got us through as there was a lot of close matches. Today it was out bottom order, yet this is a great all-round team result.”

Going into the final Queensland had won just two contests, yet were able to secure more games than any other team to have a half-match advantage over New South Wales.

“Once Jake [McLeod] secured our fourth match on the 18th, it was all over,” said Toomey.

“We were only up at one point in three matches and I thought that we might let it slip away and Jake was one down with two to play, then holes a twenty footer on the 17th to win that hole and then hits a fantastic shot into the last for the win.”

The final certainly was won based only by margins.

Cameron Davis was unlucky not to hole out his chip shot on the 18th against McLeod and had it sunk, it would have made an interesting affair for the remaining matches on the course.

Where Queensland got the job done was in its lower order.

James Gibellini at number 6 secured a 3&2 win over Ricky Kato, Jake McLeod won 1-up over Cameron Davis and Simon Viitakngas at number 8 won 3&2 over Ruben Sondjaja.

The match play encounters this week proved why this format suits team events and with Golf Australia altering the series format from 2015 – where it will move to a combined men’s and women’s stroke play event – many are questing why tradition of these series needs to be tinkered with.