Cameron Smith rarely lets opportunities to win a tournament slip by and following his recent performances this week during the Queensland Amateur championship at Arundel Hills Golf Club, the current Australian Amateur Stroke Play and Boy’s champion is again in the box seat for another title.

Smith will meet Jake Higginbottom in the first semi-final encounter after accounting for 2007 Lake Macquarie Amateur champion, Blake McGrory, 2&1, in yesterday’s quarter final and 2011 NSW Amateur quarterfinalist, Luke Humphries, 3&2, in the first round. 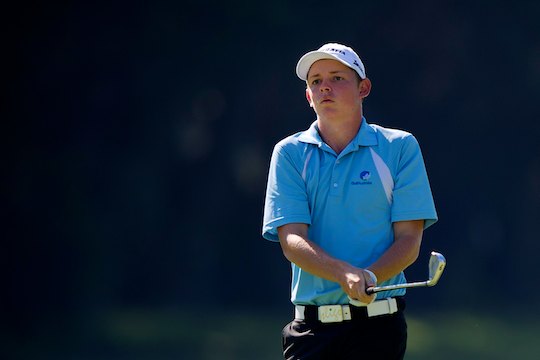 This season Smith has not finished outside the top-20 of any main amateur event, including a runner-up finish at the Lake Macquarie Amateur and a tied 11th finish at the Queensland PGA Championships.

Add to that a fine international result with a third place finish at the China Amateur Open, it’s easy to appreciate Smith’s steady climb up the world amateur ranking that has him at 27th in the world and Australia’s 2nd world ranked player, behind Matt Stieger (15th).

Smith’s semi final opponent, Higginbottom, will be no easy pushover as the Novocastrian has also established himself since progressing from the main junior amateur ranks.

Last year at the NSW Amateur championship Higginbottom powered to his biggest amateur career title so far with a stellar display of golf when he accounted for England’s, Tommy Fleetwood, with a 3&2 victory today at Royal Sydney Golf Club.

Higginbottom in progressing to the semi finals at Arundel Hills defeated Dimitrios Papadatos, 1-up, in their quarter final and Adam Mollis, 9&8, in the first round.

Hart last year lost to Brett Drewitt at Pacific Harbour Golf and Country Club and will be seeking to rectify his final performance where Drewitt fought back from 5 down after 19 holes to defeat Hart, 1-up.

With a win this year at the Federal Amateur, Hart has pushed aside the past near misses where Hart’s runner-up finishes included the 2009 Mandurah Easter Amateur, the 2008 NSW Amateur Championship, the 2009 Federal Amateur, 2009 Victorian Amateur, 2010 Queensland Amateur and the 2010 Port Phillip Amateur.

In making his way to the semi finals series Hart accounted for Jonathon Holder, 2-up, and Aaron Wilkin, 2-up.

McGraw’s pathway to the semi finals was a harder than Hart’s, with 1-up wins over Maverick Antcliff and Jarrod Freeman.

McGraw’s match with Antcliff could have gone either way with the match lead changing at least half a dozen times throughout the day. McGraw found himself two holes up with five to play. Antcliff fought back however and was able to leave the 36th hole with the match all squared.

The fluctuating contest was finally settled on the 38th hole when McGraw emerged triumphant after he made a regulation par on the second extra hole.