Veteran champion Tom Watson will make next year’s British Open at St Andrews even more special after being given a special exemption to play the Old Course and commemorate his 40th anniversary appearance.

No doubt there will be waves to his army of fans and photographs on the famous Swilcan Bridge as Watson crosses it, probably for the last time for the last time in his playing career at the Home of Golf in 2015. 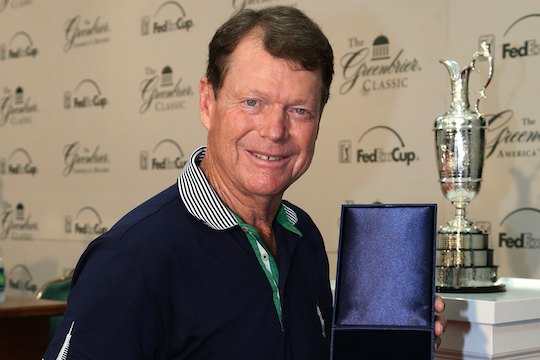 And the historic moment will happen thanks to a special exemption granted to the five-time winner by the Royal and Ancient to enable Watson to savour the occasion.

Amazingly Watson almost pulled off one of the most stunning victories ever witnessed when, at the age of 59, was beaten in a playoff by Stewart Cink in the 2009 Open at Turnberry.

Regarded as a legend of the game, Watson is one of an elite group to win five Opens, along with Aussie Peter Thomson as well as James Braid and J.H. Taylor.

Watson won his first Open when he beat Australian icon Jack Newton in a playoff in 1975.

That was the American star’s first appearance at the Open too.

Then, in 1977 there was that famous Duel In The Sun with the great Jack Nicklaus before Watson emerged triumphant with some last-hole heroics at Turnberry.

At Muirfield in 1980, Watson won by four shots from his countryman Lee Trevino. At Royal Troon in 1982 he won by one shot from Peter Oosterhuis and Nick Price and at Royal Birkdale the following year he held off Andy bean and Hale Irwin to successfully defend his title with a one-shot win.

“Some of my finest memories in golf have come from playing in The Open Championship,” he said.

“I am very proud and honoured to be given this opportunity to play once again in St Andrews next year.

“It is a special place for everyone in golf and I am very much looking forward to playing there again in front of the wonderful Scottish galleries.

“The Open Championship is unlike any other event in golf and to be part of its history is a privilege.”