It’s easy to forget that England is still in the midst of a massive COVID-19 outbreak.

Just in the past few weeks alone we’ve seen Euro 2020 played at Wembley in front of over 60,000 fans, Wimbledon with 10,000 plus spectators on centre court and now the Open Championship with some 32,000 fans expected per round. 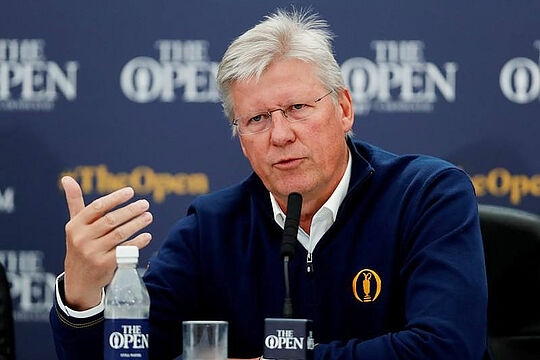 All this despite the fact that the country is nudging 40,000 new cases of COVID-19 daily.

So when the R&A’s chief executive Martin Slumbers says he is serious about the protocols surrounding the Open Championship’s player bubble, he means it.

“We’ve set out protocols for the championship. We’ve talked to all the players. We’ve made it very clear it is to protect them and their fellow competitors. It’s to give them, all the players, the very best chance of all of them being here on Sunday afternoon and able to play.”

“And I have to confess, every single one I’ve talked to has absolutely understood that and is behaving like that, so thank you to them.”

Slumbers was pressed on whether any break in the ‘bubble’ would lead to a player being disqualified?

“I think he would be at risk of being disqualified, yes,” said Slumbers, although he is conscious of the fact that not all situations are black and white.

“I’ve learnt being in officiating and rules that you want to understand the circumstances, but I don’t think that will be an issue. I think players know the risks.”

“I think it’s probably inevitable that we will have some problems, and we understand that, so does government, so does Public Health, and we’ll work through that.”

“We mustn’t forget we are staging a major event still in the middle of a global pandemic.”