Spaniard Jon Rahm has unseated Rory McIlroy to become the new World No. 1 but only after letting go of an eight-shot lead with nine holes to play and incurring a two-stroke penalty for a 16th hole infraction that could have cost him the title in most other weeks on Tour.

The 25-year-old posted a closing round 75 to win by three shots over Ryan Palmer at the Jack Nicklaus-hosted Memorial in Dublin, Ohio.

Rahm looked set to ensure daylight was second in making the turn where he lead by a massive eight shots but in the space of five holes, he gave four shots back to the field before brilliantly chipping in for a birdie ‘2’.

However, while Rahm was playing the 18th, it emerged that in addressing his ball on the 16th hole in deep rough he had unwittingly caused his ball to move at address.

Rules officials later advised Rahm of the incident and he was advised to change his score on 16 from a birdie to a bogey.

Thankfully none of that mattered and the Arizona-based Rahm now becomes only the second Spaniard after the late, great Seve Ballesteros to achieve the World No. 1 ranking. 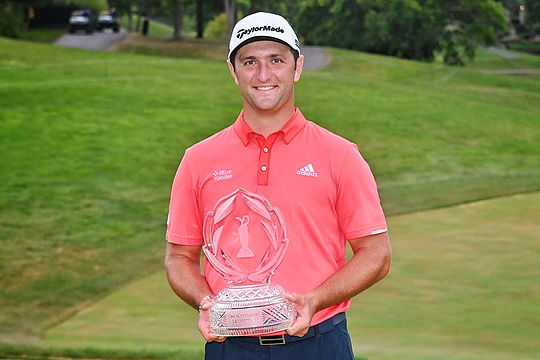 McIlroy had returned to World No. 1 for an eighth time in his career on February 2nd earlier this year and in the ensuing official ‘counting’ weeks, the Ulster golfer moved to the third all-time longest No. 1 behind Tiger Woods (683 weeks) and Greg Norman (331 weeks).

His latest reign was 11 weeks with McIlroy having been World No. 1 for a total of 106 weeks with Dustin Johnson the next best on the active players list with a total of 91 weeks.

American Ryan Palmer was runner-up in carding a 74 for a 6-under par total, and while disappointed not to have gone one better than his victorious partner at last year’s Zurich Classic of New Orleans, the Texan earned an invitation into September’s US Open.

Rahm began his move to the top, and a four-shot 54-hole lead, thanks to four straight birdies late on day three on the Muirfield Village course.

Not even a 49-minute delay due to the threat of bad weather early into his final round would deny the powerhouse Spaniard claiming a third ‘individual’ PGA Tour win and an 11th win worldwide.

Sadly, McIlroy was yet another Sunday after thought carding a 78 for a disappointing four-over par tally.

McIlroy failed to break par over the four days for the first time since October 2018 at the WGC – HSBC Champions in Shanghai.

Another former World No.1, Tiger Woods, marked his return to the Tour for the first time in five months with a last day 76 for a six-over par total.

“It’s been a while so it was nice to get my feet wet and compete and play again,” said Wood.

“It’s been tough, tough conditions to start out my first week back, Thursday and Sunday. But it was good to get the feel and the flow of competing again.”

And when quizzed on what he felt he learnt in his first event in five months Woods said: “Well, I didn’t putt well. I didn’t feel comfortable playing break.”

“I’ve been in Florida playing Bermuda and seeing minimal break, come out here and playing 10, 12 feet of break was a bit different and something I’m going to have to get used to.”

Jason Day claimed his second top-10 in consecutive tournament to lead the Australian results again this week. The 32-year-old finished in a share of 4th place alongside England’s Matt Wallace.

Marc Leishman faded with a Sunday 76 to fall into a tie for 40th while Cameron Smith suffered a similar fate with a 7-over 79 seeing him share 68th.

Jason Scrivener was the lone Australian to miss the weekend.

The PGA Tour now heads to Minnesota for the $6.6m 3M Open at TPC Twin Cities in Blaine.