The much-anticipated return of golf’s original Championship is nearly upon us with the 149th Open teeing off on Thursday at the iconic Royal St George’s.

The world’s best have descended on the Kent coastline along Sandwich Bay with all eyes on who will be lifting the coveted Claret Jug come Sunday afternoon.

With the 149th Open postponed from its original date last summer due to the COVID-19 pandemic, Ireland’s Shane Lowry has had the rare distinction of holding the Claret Jug for two years before having to defend it.

“I’ll be happy to be announced as the Champion on the first tee, I’ll be happy to get my first tee shot away and, if you’ve seen the rough on that first hole, I’ll be even happier if it’s on the fairway!,” joked Lowry at yesterday’s press conference.

Jordan Spieth and Rory McIIroy are among the elite who are looking to capture another major. 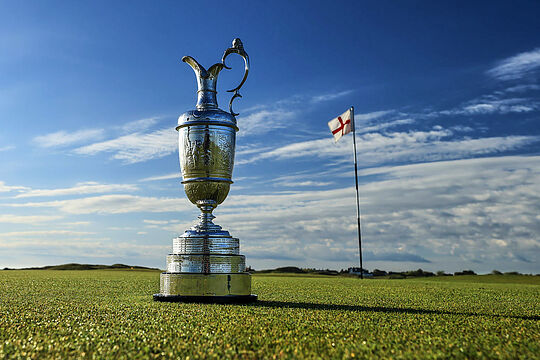 It’s been seven years since McIlroy won his fourth major title at the British Open at Royal Liverpool, while Spieth’s third and most recent was in 2017 at Royal Birkdale.

Jon Rahm will be going for his second straight major championship after capturing his first title last month at the US Open, and Dustin Johnson is looking to return to form following his Masters win in November.

Despite his lack of form, Johnson returned to World No.1 this week knocking off Jon Rahm, who finished 7th at the Scottish Open on Sunday.

Rahm is strongly considered the player to beat having shot in the 60s in nine of his last 16 rounds, including two challenging majors. He hasn’t finished in the top-10 in four Open appearances, but came close in 2019 with a share of 11th.

American Bryson DeChambeau who overcame the rough at Winged Foot to win the US Open last September will sure to be another challenger given his sheer strength and ability to dismantle a golf course.

There are 11 Australians at Royal St. George’s this week with Lucas Herbert fresh off his win at the Irish Open and a share of 4th at last week’s Scottish Open behind Western Australian winner, Min Woo Lee.

Herbert and Lee will also be joined by Marc Leishman, Jason Day and Adam Scott. Recent Rocket Mortgage Classic champion Cam Davis is unable to attend due to a delay with his green card processing in the US.

Jason Scrivener is an Aussie to watch this week. He’s the 11th-ranked player in the European Tour’s Race to Dubai and has recorded three top-10 results in his last five European Tour starts.

It’s been a wonderful few weeks for Australians in Europe and Scrivener is a capable links player who will be feeding off the recent Aussie successes on both sides of the Atlantic. His best result from two major appearances is a share of 23rd at the 2021 PGA Championship.

The Australians will be looking to fare better than when the Open was last played at Royal Portrush where Cameron Smith was the best and only Aussie to make the cut finishing in a share of 20th position.

Greg Norman won at Royal St. Georges in 1993 with a 13-under-par total and was the only winning score better than 5-under in the last five Opens which Royal St. George has hosted. The most recent was in 2011 when Darren Clarke took the title.