(Dubai, UAE:) Jon Rahm has been crowned the 2019 Race to Dubai Champion after claiming the richest first prize in tournament golf with a dramatic victory in the DP World Tour Championship as the European Tour season-long contest came down to a single shot.

The Spaniard held off a determined late charge from Englishman Tommy Fleetwood to seal his second DP World Tour Championship title in three years and his fourth Rolex Series victory.

Rahm went into the final round in a share of the lead with Frenchman Mike Lorenzo Vera, but he pulled six shots clear after seven holes.

The 25 year old dropped consecutive shots on the eighth and ninth holes and his lead was further eroded on the back nine as Fleetwood finished with five birdies in his final seven holes to sign for a 65 and set the target of 18 under par.

That meant Rahm, who had posted two birdies and two bogeys after the turn, then had to birdie the last hole for victory to avoid a winner-takes-all play-off with Fleetwood to decide both the tournament and the Race to Dubai.

He duly held his nerve with a superb bunker shot to four feet before rolling in the putt for a 68 to finish on 19 under par and claim the €3million first prize, becoming just the second Spaniard after Seve Ballesteros to be crowned Europe’s number one. 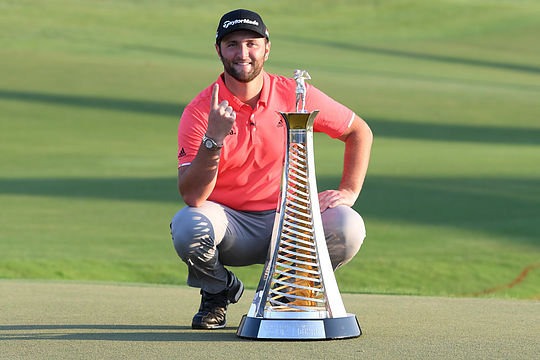 “Man, you dream of making birdies on 18 to win a tournament. And how I was playing early on, I was hoping not to need that, but it happened, and I came through when I needed it and really proud of myself for that.”

“It’s really so hard to believe that some of the greatest champions in European golf and Spanish golf haven’t been able to accomplish what I have in just three years. That’s what I can’t really put my mind into.”

“Sergio has been a great Spanish champion for years, a major winner. Ollie, two-time major championship winner. Miguel Angel Iimenex has done a great job, as well. Alvaro Quiros has won this event. So many great players throughout the history of Spain that have had a chance and they didn’t get it done.”

“It’s just hard to put that in perspective to know that since Seve, I’m the next one to get it done. I mean, I can put the words, but it just doesn’t feel like it’s true. It’s hard to believe.”

Runner up Fleetwood finished second in the Race to Dubai despite a fine finish to the season after winning last week’s Nedbank Golf Challenge Hosted by Gary Player.

Lorenzo-Vera also missed out after he posted a closing 70 to finish third on 17 under par as he ended the year in a career-best 19th position on the Race to Dubai.

World No.2 Rory McIlroy could not replicate the fireworks of his third round 65 as he ended a fine personal year with a 73 to finish seven strokes back in fourth place on 12 under par, with defending champion Danny Willett a further shot back in fifth after a 69.

Austrian Bernd Wiesberger, who had led the Race to Dubai going into the season finale, posted a round of 72 to finish in tied 28th position on two under par. He slipped to third position in the final rankings, with Ireland’s Shane Lowry and England’s Matthew Fitzpatrick completing the Race to Dubai top five, each earning a share of the $5million bonus pool.

He has now made €2.5 million in Europe, which is made all the more impressive with no victories to his name – just consistent golf.

Scott Hend was the only other Australian in the field and finished in a share of 49th place.