There was surprise and then shock for those watching the final moments of the third round coverage of The Memorial at Muirfield Village in Ohio.

Spaniard Jon Rahm was all smiles having just matched the tournament 54-hole record with an eight-under par 64 to move to 18-under par and an impressive six shots clear of his nearest rival. 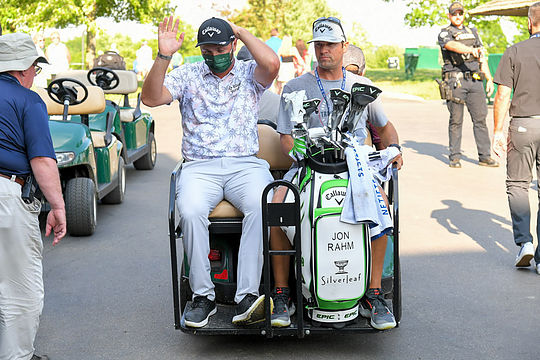 The World No. 3, and with an inward nine of six birdies, also brilliantly tied The Memorial record for largest 54-hole lead set by Woods in 2000.

What happened next is something I am sure has not been witnessed before in golf with the 26-year-old heading for the scorer’s hut before being stopped by two PGA Tour officials.

There was uncertainty at first. Initial thoughts were that Rahm was being told he may have broken a rule and was being advised accordingly.

Though the sight of Rahm bending over and holding his hands up to his face spoke of something more serious such as a tragedy in the family.

“Not again”, we heard him say as Rahm wiped tears from his eyes.

Host TV broadcaster CBS were also not aware what was taking place but as Rahm made his way up the slope at the back of the 18th there were tears flowing down his face. We learnt from on-course reporter, Dottie Pepper that Rahm had tested positive for COVID-19 and, as such, had to disqualify himself immediately from the event.

Why the PGA Tour chose such a full-frontal, open and public place at the back of the 18th green to advise Rahm was being ruled out of the event is a surprise when the privacy of the Muirfield Village clubhouse was just metres away?

There was also the reaction from Rahm’s caddy in waving away a CBS cameraman who was getting too close to Rahm as walked, and head bowed, to the scorer’s hut.

Once news of Rahm’s WD became public Twitter went into overdrive with most comments critical of the PGA Tour in not allowing Rahm tee-up on final day, and even suggesting he go out by himself.

Late on Saturday night, Rahm made a statement on his Twitter page, saying that he was “very disappointed in having to withdraw from the Memorial Tournament. This is one of those things that happens in life, one of those moments where how we respond to a setback defines us as people.”

“I’m very thankful that my family and I are all OK. I will take all of the necessary precautions to be safe and healthy, and I look forward to returning to the golf course as soon as possible.”

Jack Nicklaus, the host of the Memorial tournament and the designer of the golf course, wrote on his Twitter feed shortly after the third round: “Our hearts go out to Jon and his family as well as all the patrons who witnessed a spectacular round by Jon — only to be negated by this horrible pandemic our world continues to endure.”

Nicklaus, now aged 81 had contracted COVID-19 along with his wife, Barbara, in 2020, added: “I wish Jon a speedy recovery and hope he gets back to competition soon.”

According to the PGA Tour, Rahm was notified on Monday that he would be subject to contact tracing because he had come in close contact with an unidentified person who had tested positive for the virus. Tour protocols permitted Rahm to remain in the tournament if he agreed to be tested every day and avoided using indoor facilities at the event.

The PGA Tour’s Andy Levinson was asked if there was an option that would allow Rahm to play Sunday’s final round by himself if he stayed at least six feet from others in what is a large outdoor area. Levinson said the tour’s medical advisers did not recommend participation in a competition the day after a confirmed positive test.

So, while the remaining 68 players will head out on day four of the $US 9.3m event, Rahm is required to go into self-isolation for 10 days. That will end late on Tuesday, 15th June and just two days before the start of the U.S. Open at Torrey Pines, where Rahm captured his first PGA Tour victory four years ago.

It will leave him time for only one practice round on the U.S. Open-conditioned course.

Not even the chance of a false positive test could spare Rahm. Under the tour’s CDC-guided protocols, players would have to return two negative tests 24-hours apart to end the 10-day isolation.

Sadly, and despite the enormous out-pouring on social media, Rahm will be watching the final round from the self-isolation of his Arizona home.