Spain’s Jon Rahm nailed a stunning 20 metre putt in a dramatic playoff with Dustin Johnson to win the 2020 BMW Championship at Olympia Fields on Sunday.

It was a final day full of drama. Rahm finished at 4-under, and it looked like Johnson was going to come up a stroke or two short. Instead, the World No.1 birdied the 15th and made one of the best 3′s of the year on the 18th by sinking an impossible 13-metre putt over a ridge and down hill to force the playoff.

Rahm won for the second time this year on the PGA Tour, and the 11th time in his career worldwide.

“I knew how good D.J. has been playing,” said Rahm. “I was expecting nothing else. I was fully confident it was going to come into a playoff and hoping to win it. Never did I think I would make another 50-, 60-footer, a couple of breaks in there, to end up winning it.”

Johnson remained No. 1 in the FedExCup standings while Rahm moved up to No. 2 as the Tour Championship begins this week. 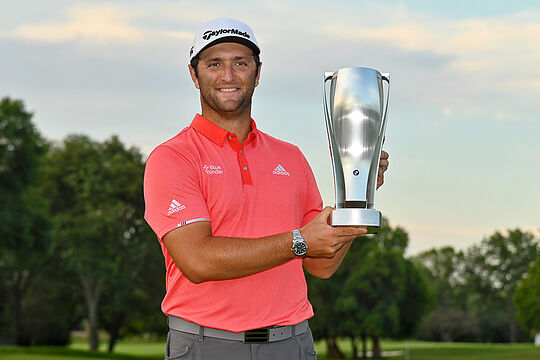 With the victory, Rahm grabbed the first-place prize money payout of US$1.71 million from the overall purse of US$9.5 million.

Joaquin Niemann, the 21-year-old from Chile, also made a spirited run with a 67 and was in the lead until a bogey on the 14th and no birdies the rest of the way. He tied for third with Hideki Matsuyama, who had a 69.

Tony Finau closed with a 65 to finish three behind. They were the only five players under par at Olympia Fields.

Leishman and Smith are the only Aussies to finish inside the top-30 and progress to this week’s Tour Championship.

Tiger Woods made double bogey on his 17th hole for a 71, making this the first time he was over par in all four rounds of a tournament since the Bridgestone Invitational in 2010. Woods also failed to reach the Tour Championship for the second straight year. He now gets two weeks off before the US Open at Winged Foot.

The unprecedented 2019-20 PGA TOUR season will come to a close at East Lake Golf Club with the finale of the FedExCup. Only the top 30 players in the FedExCup standings qualify for the TOUR Championship, which will conclude on Labor Day.