Spain’s Jon Rahm has fired a closing round 62 to secure his second Irish Open victory at the Lahinch Golf Club in County Clare.

The 2017 champion began his final round five shots off the lead following a 6-under 64 on Saturday. However, eight birdies and an eagle at the par-5 12th moved him to 16 under to finish two shots clear of Austrian Bernd Wiesberger and England’s Andy Sullivan.

“I love this tournament,” he said. “I love this country. I love the people and feel like I’m at home every time I come.”

“I’m excited to repeat. I think Seve was the only Spanish player to win more than one and to join my name to that Cup again, it’s special.”

“My game was in great form, it just didn’t show the first two days. I couldn’t hole the putts and the weekend was the complete opposite.” 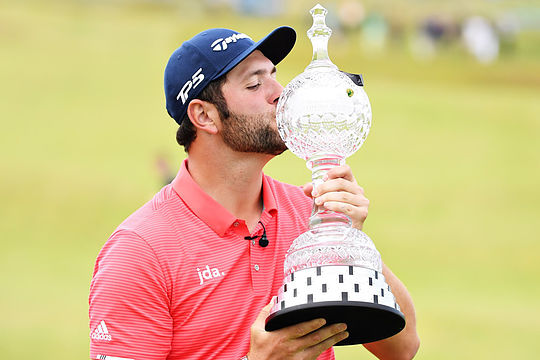 It was just two years ago that Rahm won this trophy in his rookie season for his maiden European Tour win and now has he has four wins in Europe and another three stateside titles.

The €1 million first prize purse takes the 24-year-old to the top of the Race to Dubai Rankings and back inside the world top ten.

Rahm has enjoyed a remarkable run of form finishing third, second and first in his last three starts from the US Open through to the Andalucía Masters and then in Ireland on Sunday.

Wade Ormsby took the top honours for the Australian field closing in a share of 19th place following three rounds of 69 after opening with a superb 65.

Sam Brazel was next best in a share of 50th place at 1-under with Lucas Herbert another shot back at even par.