Rahm won the season finale first in 2017 again in 2019 and now for a third occasion three years later.

It was just last month the super Spaniard toasted a Spanish Open victory in Madrid that also was his third success this year following his earlier Mexico Open triumph.

Rahm was slow out of the blocks on the Earth course, ironically a Greg Norman designed layout, posting a two-under-par 70 but from there on it was Rahm at his powerhouse-best producing a second round 66 and then muscling his way to two-shot lead on day three.

If there was any doubt Rahm may falter he quickly erased that thought starting with a hat-trick of birdies ahead of capturing a third DPWTC title along with a 16th pro career victory.

“It’s very special. I said that I feel like that I’m defending the title three years ago that I couldn’t come and defend. Proud of myself for that and how well I’ve done, especially on the weekend,” he said.

“It’s pretty unusual for me to win a tournament driving it as bad as I did, and to have the other parts of my game carry me to my win, it’s something really special. I managed it really well, and I felt really comfortable on the greens made a couple of clutch putts; a switch that, you know, for a year where I’ve been hearing my putting has been bad, it feels really amazing to get it done like that.” 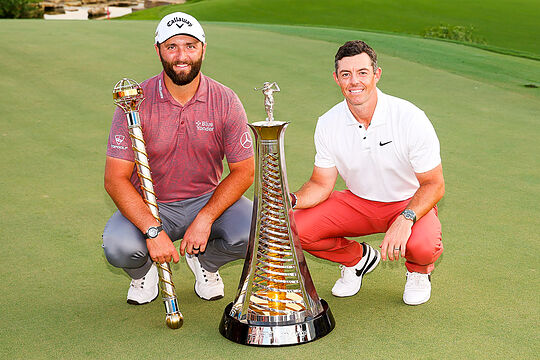 “It’s also great to win again here in Dubai, as I feel fairly confident on the golf course. Obviously I’m not thinking about the statistics while I’m playing, but yeah — best way to say it, for some reason, every time I’m on the tee box, I’m confident, I’m cost in my swing and it clearly showed in my golf.”

However, Rahm went into a real downbeat mood when it was suggested to him that his victory will see him remain at No. 5 on the World Rankings. Of course, the Spaniard had earlier declared the re-worked Rankings ‘laughable’, and now four days later he was in much the same mood

“I mean, I beat amazing players today. I don’t know if I can add any more to what I said. Maybe I was too far back, I don’t know. I’ve gone second, first, fourth, second — first, sorry, and I have not changed my World Ranking. I don’t know if that explains what I meant the other day but it should,” he said.

McIlroy ended his season in outright 4th place on 16-under and two shots behind England’s Tyrrell Hatton and Alex Noren in equal second on 18 under.

“I am very proud of myself and, in fact, Harry and I were talking going up the last fairway as it seemed like a long time since San Antonio and the Texas Open, and in the week before Augusta this year, when I was struggling a little bit and I made a couple of tweaks with my game and my equipment, and went to a new golf ball,” said McIlroy.

“It seemed like just after that my year turned around and got a ton of momentum at the Masters and I just continued from there.”

Min Woo Lee was the only Australian to make it to the season-ender and finished with an impressive tie for 12th place and 34th overall on the DP World Tour Rankings.

“It’s been an amazing last handful of events for me on the DP World Tour, and it would have been amazing to finish top-10 but then a share of 12th is a pretty good result in a world-class field,” said Lee.

The DP World Tour will barely get a rest with two co-sanctioned events signalling the beginning of the 2023 season later this week. The Joburg Open tees off at the Houghton Golf Club in Johannesburg while the co-sanctioned Australian PGA Championship gets underway this Thursday in Brisbane.