Rahm has now won three of the last five years at the event, adding to his eight European Tour wins. The 27-year-old, who won the tournament in 2018 and 2019, had eight birdies and an eagle in a superb final round of nine-under-par 62. It was Rahm’s second win of the year after his victory at the Mexico Open in May.

“I understand it might not be the strongest field I play all year but sometimes these can be the hardest to win,” said Rahm.

“I’m at home, I’m supposed to win, everybody is betting on me to win and to come out and play a Sunday like I just did is hard to describe. It’s my lowest score out here, it was pretty much a perfect week. The only thing that would make it better is if my wife and kids were here, but I have a lot of family here that I don’t see throughout the year to celebrate with.”

Rahm’s three wins at the Spanish Open match that of his hero Seve Ballesteros.

“It was the goal coming in,” said Rahm. “Seve is a great hero of mine and to do something he took his whole career to do in just a few years is quite humbling, I’m not going to lie.” 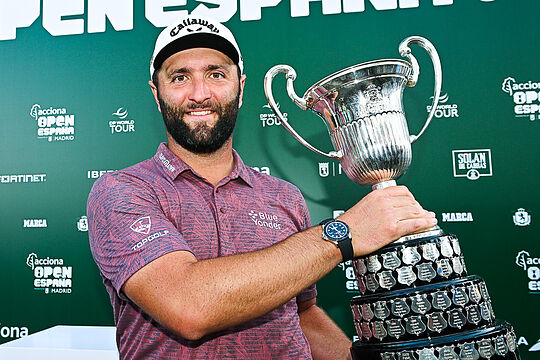 Ballesteros won the last of his 50 titles on the European Tour at this tournament in 1995 adding to previous titles in 1981 and 1985.

Min Woo Lee finished the best of the Australians taking out 3rd position at 18-under-par, with Maverick Antcliff in a share of 62nd position.

Lee, who matched Rahm shot for shot while playing alongside him in every round, just could not keep up with the blazing Spaniard despite being just a shot behind after he eagled the seventh before closing with a 68.

“Gave it my best today. Solo 3rd. So many positives to take from this week. Head to head with the world’s best. This week was unbelievable with the Spanish crowd, it’s why I play the game. Valderrama, up next!” tweeted Lee.