Aaron Rai has won the Scottish Open after defeating Tommy Fleetwood on the first hole of a two-way playoff.

The Englishman fired a final round 7-under 64 to set an 11-under tally before fellow countryman Fleetwood brilliantly birdied the final hole to sit alongside Rai.

Both players headed back to the 18th where Rai chipped to within a metre and a half of the hole while Fleetwood left his third shot a metre short.

Rai went ahead and confidently knocked-in his par putt with the match seemingly certain to head to a second play-off but the unthinkable happened with Fleetwood, a winner of five European Tour events and a European Team hero at the 2018 Ryder Cup, failing to even hit the hole with his short par putt.

And so it was Rai, who would claim the Scottish Open silverware for the second European Tour title of his career, perhaps making up for his narrow miss at last week’s Irish Open where he finished two behind winner John Catlin. 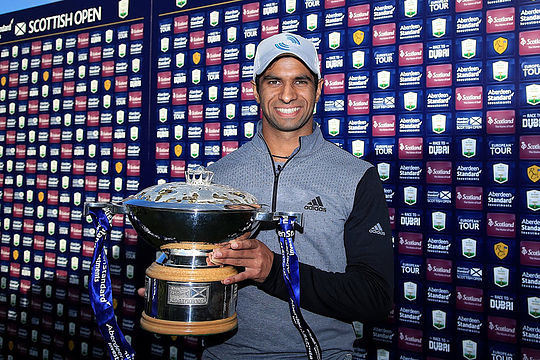 So, a week after being the tournament bridesmaid in Ireland, Rai was the proud victory groom in Scotland.

“It was the first time I had been in that situation for a while, and it was nice to get a feel for myself again in that situation. I think even today, it wasn’t really in my mind for the first, probably six or seven holes, and then I realised that we were getting quite close to the leaders at around that point.”

“I would probably go so far as to say without last week, this week wouldn’t have happened.”

Rai’s victory has moved him inside the top-10 in the Race to Dubai and the top-100 in the world rankings.

While Rai will be celebrating tonight, Australia’s Lucas Herbert will be rueing a prime opportunity to claim his second European title of the season.

The Victorian was leading the way after rounds of 66 and 65 before a third round 79 saw him fall back into 22nd place.

To his credit, Herbert bounced back superbly on day four with a 6-under 65 to secure a share of 4th place and finish just two off the lead.

Wade Ormsby was next best of the Australians in a share of 19th while Min Woo Lee (T30), Maverick Antcliff (T36) and Scott Hend (T59) made it through to the weekend.

Jason Scrivener failed to make the cut with back to back rounds of 75.