England’s Aaron Rai held off fellow countrymen Matthew Fitzpatrick to win his first European Tour title by one shot in the season-opening Hong Kong Open on the European Tour.

Rai’s first title was not without nerves as his six-shot overnight lead was cut to one as Fitzpatrick fired a final-round 64 to finish on 16 under and five shots clear of Aussie Jason Scrivener and Victor Perez in a share of third place, with Scotland’s David Drysdale a further stroke back in fifth. 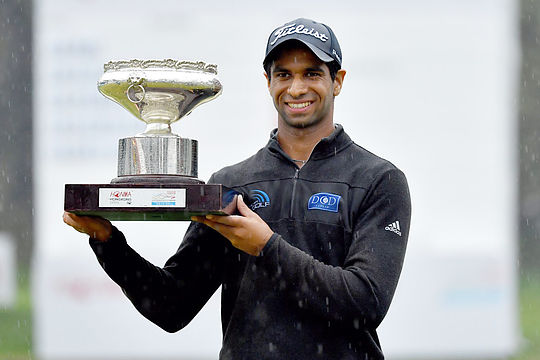 Back-to-back birdies over the first two holes by Fitzpatrick were followed by a 12 metre putt at the 8th to see him make the turn in 31 and move on Rai as he dropped shots at the sixth and eighth.

Fitzpatrick rolled in from two metres at the tenth to close the gap to two shots, only for Rai to make a 3 metre putt at the 12th and match his playing partner’s birdie at the par-five next.

Birdies at the 14th and 16th moved Fitzpatrick within one, only for him to bogey the 17th and allow Rai to clinch victory with a three-putt bogey at the par-four last.

It was Rai’s first win in his 46th appearance on the European Tour, with his best previous result a tied fifth at the 2018 BMW International.

“It definitely hasn’t sunk in just yet,” said an elated Rai. “I’ll probably need a few days for that to happen. It’s incredible to win on any Tour, let alone the European Tour and let alone the Hong Kong Open.”

For Scrivener this was the perfect season opening start and he’ll arrive for this week’s PGA Championship at the Gold Coast full of confidence. Scrivener finished 68th last season in the European Order of Merit having played 31 events and making the cut in 20 to bank his best season on tour to date.

The Hong Kong layout also suited fellow Aussies Scott Hend and Jake Higginbottom with the pair securing a top-10 result sharing 9th position. Sam Brazel and Deyen Lawson, who was making his debut after earning his European Tour card via Q-School, also made the weekend, along with Wade Ormsby, Terry Pilkadaris.