Rain interrupted US Open pays off for Scott

Adam Scott carded four birdies and just one bogey in his 11 holes to be at 3-under par, one shot off leader Luke Donald before play was suspended due to darkness at the US Open Championship in Pennsylvania.

Donald was on the 13th when play was stopped. 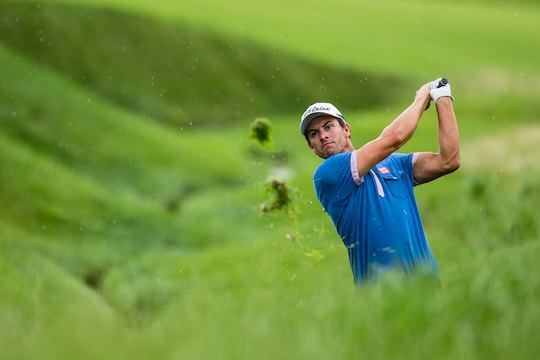 Adam Scott plays his second shot on the fifth hole during the first round of the 2013 US Open (Credit: USGA/John Mummert)

Scott is in a share of second place alongside clubhouse leader, Phil Mickleson.

Reigning US Open champion Webb Simpson is at 2-under through eight and in a share of 4th position along with Aussies Matt Goggin and Alistair Presnell, who have completed six holes.

Two rain delays played havoc during the opening round with over four hours of lost time.

Five times US Open runner-up, Mickelson overcame a three-putt bogey on his first hole to card a three-under-par 67 to be the clubhouse leader after eighteen holes.

In his 22 previous US Open starts, Mickelson had opened with a score lower than 68 only once, at Pinehurst in 1999.

He remains the man to catch with over 150 players yet to complete their first round.

Scott kept alive his dream of a Grand Slam with impeccable iron play around the demanding Merion layout and looked solid off the tee, calling for the driver on only two holes on the 5th and 6th.

Jason Day and John Senden are at even par after 11 holes, currently tied 16th.

Marc Leishman after 11 holes and Geoff Ogilvy after 13 holes are at 2-over, the same score as world number one, Tiger Woods, who was on the 10th when play was stopped.

Woods, a 14-time major champion, bogeyed three of the first five holes and was seen grimacing and shaking off his left hand after hitting shots out of the rough on the 1st, 4th and 11th holes in what might be a wrist injury.

Aaron Baddeley struggled to a five-over 75 and Marcus Fraser was six-over through 11 holes.