Brett Rankin has dominated the field playing exceptional golf at the Lae Golf Club to be crowned the 2019 NKW Group Morobe Open champion.

Firing 3-under 69 in the final round for a tournament total of 20-under, Rankin claimed victory by four shots from his nearest competitor Brady Watt, who completed the tournament alone in second place on 16-under. 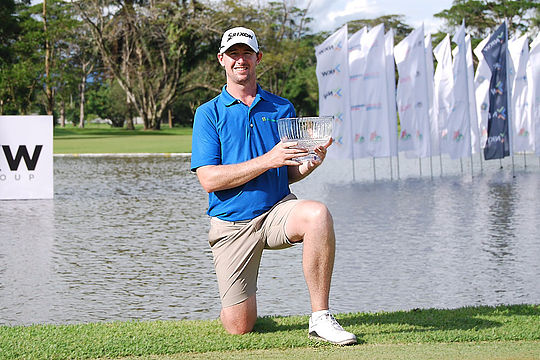 Rankin made the turn at 2-under 35 in the final round and while a bogey on the 14th hole threatened to derail the round, birdies on the 15th and 16th holes secured the win.

A trio of players including Jay Mackenzie, Watt and Martin Dive mounted a charge for the lead midway through the round however Rankin held his nerve throughout the day.

“I felt I was in control of the tournament throughout the day,” said Rankin.

“I knew I just needed to shoot in the 60’s today and that would be good enough to win the event.”

This result is the four-round tournament win breakthrough for Rankin who was thrilled to take the title.

“It is a great feeling winning the NKW Group Morobe Open in Lae here today. I have been fortunate to win many one and two-day pro-ams on the Ladbrokes Pro-Am Series but this is the first four round tournament,” Rankin added.

“I still played great today but I didn’t hole as many putts which was the difference in the score.”

Competitive amongst the front-runners for the duration of the tournament, New South Welshman Martin Dive rounded out the top three, finishing with a tournament total of 14-under 270.

Daniel Fox and Jay Mackenzie completed the top five sitting equal in fourth place at 12-under 272.

Professional golf remains in Papua New Guinea this week with the SP Brewery PNG Open being staged at the Royal Port Moresby Golf Club as part of the ISPS HANDA PGA Tour of Australasia starting on Thursday.