New Zealand’s Campbell Rawson has won his first Australasian Tour event after securing the Victorian PGA Championship by a stroke from Marcus Fraser at the RACV Cape Schanck Resort on the Mornington Peninsula.

Rawson fired a final round 5-under 64 performance to finish on 10-under par for the tournament. 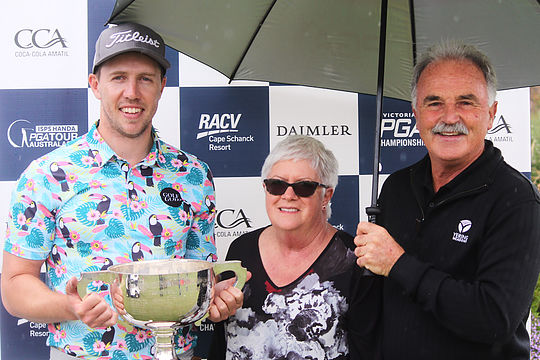 Earlier, Rawson almost missed the cut after opening with rounds of 70-71, but rebounded wonderfully with a third round 65 to start the final day two behind overnight leaders Michael Sim and David Micheluzzi.

“Now I’m really focused on some of the bigger events I’ll get exemption to and hopefully can put up some good performances there.”

Fraser certainly had his chances to claim the title, sharing the lead with Rawson on the 15th hole before the Kiwi fired off a string of birdies playing the last four holes at 2-under-par.

Fraser’s final round of 64 was a majestic display of precision golf with a pair of 32′s for each nine in a bogey free round.

“It’s not often you’re disappointed after shooting 64 in the last round bogey-free. I desperately wanted to have my name on that trophy,” said Fraser.

“After scaling back my overseas playing schedule, I want to come home and play well. I feel like I played well this week, but felt my earlier rounds let me down. I was on the back foot going into the weekend, but really happy with yesterday’s round and to have played well today and give myself a chance.”

“If you probably would have given me second at the start of the week I would’ve almost taken it. I desperately wanted my name on that trophy and have to wait another 12 months to get that chance again.”

Sim finished the tournament in outright 3rd position at 6-under after closing with 70. Rookie professional Blake Collyer, who also had a share of the lead during the championship after opening with rounds of 69-61, finished in 4th position at 5-under-par. Mark Brown and Andre Dolt rounded out the top-5 at 4-under-par.

The next event of the Australasian Tour schedule is the Gibson Super 6 at Yallourn Golf Club starting 7th November, followed by the NSW Open starting 28th November at Twin Creeks Golf Club in Sydney.

Rawson’s name will be etched on the Victorian PGA trophy alongside the likes of Marc Leishman, Cameron Percy, Stuart Appleby, Peter Senior, Ken Nagle and Ossie Pickworth to name a few.