England’s Neil Raymond has won the NSW Amateur Medal after the championship was reduced to 36 holes following torrential rain in Sydney which forced the cancellation of the third and final rounds at Mona Vale Golf Club.

Raymond won the title on the first play-off hole over Brett Drewitt after the pair finished at 3-under-par for the two opening rounds. 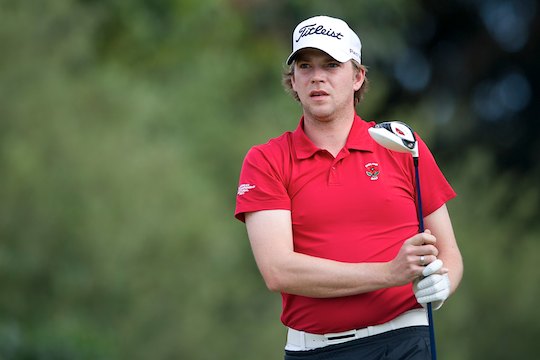 Drewitt carded rounds of 73-68 with the Englishman firing 67-74. They were a stroke ahead of David Morgan, with Daniel Bringolf, Gary Hurley, Reeve Whitson and Jordan Zunic in a tie for fourth position three behind Drewitt and Raymond.

Six players were forced to play-off for the 32nd position in the match-play after finishing at 4-over-par, with the 2010 Australian Amateur champion Matt Stieger clinching the final berth to set up an opening encounter with Raymond.

The revised format resulted in a number of high profile amateurs missing the cut with Ben Campbell, Oliver Goss, Todd Sinnott, Nathan Holman, Daniel Nisbet and Geoff Drakeford all packing their bags and departing these championships.

With the way the draw has unfolded Drewitt, Watt, Burke, Bringolf and Higginbottom are all in the bottom half, making for a challenging few days at Elanora.

Higginbottom will meet Mitch Harry in the opening round with the chance to meet Bringolf in Tuesday’s semi-final. Before making the semi-finals Bringolf potentially will have to account for either Drewitt, Watt or Bourke.

The top-half of the draw sees Zunic well positioned to progress through these championships after a stellar effort making the semi-finals at the Australian Amateur a fortnight ago.

Zunic will meet Daniel Pearce in the opening round.

The Stieger/Raymond opening encounter will be a corker. Stieger will be seeking to re-establish his form following his Australian Amateur defence where Marcel Schneider pipped Stieger in their round of 16 match-up.

Stieger missed last week’s Lake Macquarie Amateur in preparation for this championship. Raymond won the 2011 Brabazon Trophy and is coming off a top-15 finish last week at Belmont.

The winner of this match should progress well through the draw.

With a number of top amateurs out of this year’s NSW Amateur the tournament will bring a few surprises.

Drewitt has hit some form and will be looking to add the NSW Amateur title to his 2010 Queensland Amateur win. Higginbottom is safely through to the match-play series and will take some stopping.

Keep an eye on Bringolf as he played well at the Australian Amateur making it through to the quarter finals. Bringolf won the 2011 Malaysian Amateur and is a fine match-play exponent capable of claiming this title.