Playing in the morning field, Bransdon fired an 8-under 64 to take a one shot lead into the second round of the tournament. 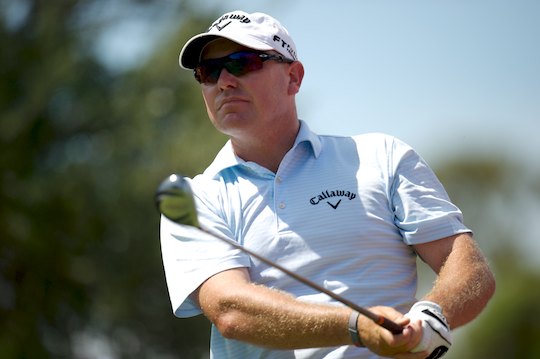 Coming into the Victorian PGA Championship following a disappointing midfield finish at the Oates Victorian Open, Bransdon turned his putting around in the day break between the two tournaments.

“We didn’t have a big turnaround but I did do some putting work.”

“A mate of mine, Matty Millar noticed that my stroke looked really quick. Today I just concentrated on keeping my rhythm a lot slower and it worked.”

The man who gave him the sage advice, Matthew Millar is 6-under the card and outright second.

Bransdon has plenty of experience playing Huntingdale Golf Club having competed in the Australian Masters when the tournament was hosted by the venue.

“I’ve played 1000 Masters here; it feels like since I am so old, 1993 was the first one, most of the guys in the field this week probably weren’t even born yet,” added 41 year old Bransdon.

“I have played a lot of years at Huntingdale and the course has changed a lot over those years.”

“I actually think it’s the best it’s been in a long time, since they got rid of some of the elephants under the greens.”

Effectively utilising his course knowledge, Bransdon believes you don’t need to be the biggest hitter on Tour to capitalise at Huntingdale.

“You need to be smart round here, that’s one thing that hasn’t changed over the 20 odd years I have been playing at this course,” added Bransdon.

“If I have any local knowledge, you sacrifice some length off the tee to hit it on the fairway.”

Having played in the morning field and, looking to have had the better side of the draw, Ryan Haller, Aaron Townsend and Anthony Houston all fired rounds of 5-under 67.

Conditions in the afternoon made for tougher scoring but Won Joon Lee and Ryan Fox managed to cards rounds of 4-under 68 to be tied 6th.

Rounding out the top-10 on 3-under the card are Scott Strange, Max McCardle, Todd Sinnott, Ed Stedman, Michael Hendry and Neven Basic.

In the SEN Challenge, where amateurs have teamed up alongside the Professional to experience the action inside the ropes, David Bransdon and Rodney Hogg are tied for the lead with Ryan Fox and Gerard Peterson on 12-under the card.