It was a tense battle between World No.1 Jon Rahm and Cameron Smith but in the end it the mulletted Queenslander came out on top with a PGA Tour record 34-under total just enough to hold off the Spaniard by a single stroke on the final hole of the day.

Smith was relentless in the pursuit of a second Hawaiian title after Rahm’s third round 12-under 61 left the pair tied for the 54-hole lead. Both players were shaking off the rust following an extended time away from the game over the holiday season.

“It was pretty crazy. The putts kept going in. I felt like, with Jon obviously playing with him over the weekend, I felt like I needed to make a birdie to kind of keep up with him or stay in front,” said Smith.

“That was the key over the weekend, I think, just to see the putts go in.”

“I’ve been fortunate enough to be here two times before. I love Maui. It’s such a cool place and obviously you’re competing against the best guys the year prior and all guys that know how to win a golf tournament.”

Smith fired a bogey-free 8-under 65 for his 34-under total while Rahm carded a blemish-free 7-under 66 to finish on 33-under; both players breaking the previous record of 31-under set by Ernie Els back in 2003.

In fact only three players in PGA Tour history have ever finished a four-day event on or below 30 under including Els, Jordan Spieth at the 2016 Hyundai Tournament of Champions and Dustin Johnson when he won the Northern Trust for the third time in 2020.

Smith now moves up 30 spots into third place on the FedExCup table and inside the top-10 in the Official World Golf Rankings – Smith’s highest ever OWGR position. 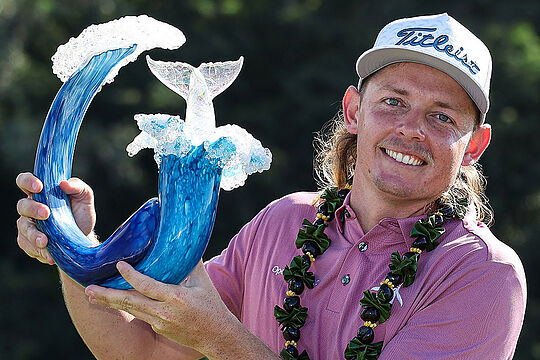 Perhaps forgotten in the mix was Matt Jones, who very nearly stole the show with his final round heroics. The Aussie matched Rahm’s third round 12-under 61, including eight birdies and two eagles, to leave himself in outright third place on 32-under.

“I was lucky enough to make some putts today and yesterday and then holed out a few shots today for — I holed out one for an eagle and chipped one in yesterday for an eagle, so those always help the score,” said Jones, whose weekend rounds of 62 and 61 set the record for the lowest 36-hole score to par in PGA Tour history.

“It’s just goes to show the depth of the PGA Tour and how good the players are. If you told me I would have shot 32-under I would have been more than happy to sit in the clubhouse and let everyone play and see what happens.”

Another six shots back was Patrick Cantlay in outright fourth, followed by Collin Morikawa, Justin Thomas and Daniel Berger in fifth place on 25-under.

Cam Davis and Marc Leishman shared 10th place on 23-under to make it four Australians inside the top-10.

PGA Tour rookie Lucas Herbert closed out his first tournament of 2022 in 37th place on 8-under.

The PGA Tour remains in Hawaii for the Sony Open, which Smith won in a playoff with Brendan Steele in 2020.