Australia’s Richard Green topped the class when he defeated compatriot Todd Sinnott with a birdie at the first play-off hole to secure his playing rights at the Asian Tour Qualifying School Final Stage.

Green earned his Tour card on the back of a gruelling week which saw him compete with distinction at the Suvarnabhumi Golf and Country Club. 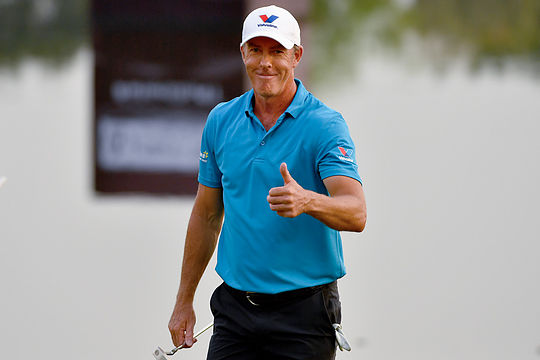 The 45-year-old marked his card with a nine-under-par 63 to sign off with four-day total of 28-under-par 260 which is the third lowest ever score in the Asian Tour history for a 72-hole scoring.

“I started to work with a new coach in Australia and he has seriously helped me a lot in the last couple of weeks.”

“I was really struggling towards the end of the year and the work we did sort of led up to this event. I really wanted to come here and play well and I’m glad I did that as I feel like my game is back to where it should be.”

“It’s nice to have a season of golf ahead of me now. I’m busy again. At one stage towards the end of the year, just before the Australian Open when I got the news from the European Tour, I thought I would be out of job but now it looks like it’s going to be a busy year. I’m very happy with that.”

It was sweet redemption for Australia’s Richard Green after suffering the agony of losing his European Tour card last season by about US$20,000. With his playing status on the Asian Tour now secured, the smiles are also now back for Green.

Despite being defeated in the play-off by his role model, Sinnott was delighted to post a final round 62. His closing 260 total was also the lowest score he has ever signed for in his career.

“The main objective was to come here and get my Tour card. I achieved that and 28-under is my best score that I’ve ever shot in four rounds,” said Sinnott.

“There was a disappointing spin at the end of the play-off but it’s okay. I got my card and that’s all that matters.”

“I grew up at the same golf course, Kooringal Golf Club as Richard Green so he is always someone I look up to. I remembered him finishing fourth at the British Open and seeing him win the Australian Masters.”

China’s Zheng Ou-yang was among the top-35 players and ties who earned playing rights on the region’s premier Tour in 2017. The Chinese posted rounds of 65, 66, 70 and 67 to finally make the grade after a previous failed attempt last year.

Sujjan Singh was India’s top performer as he finished in a share of 13th place after posting a final round 66. It was a welcome return to the Asian Tour for Singh after he lost his card in 2013.

Jake Higginbottom fired a final round 63 to make it three Australians in the top 10 this week. Higginbottom also finished inside the all-important top-6 (T5) and will join the likes of Adam Scott at this week’s $1 million Singapore Open.