Spieth was unchallenged over the four days leading from tee to green to post a final round 70 for a Masters record equaling 18-under par tally at Augusta National. 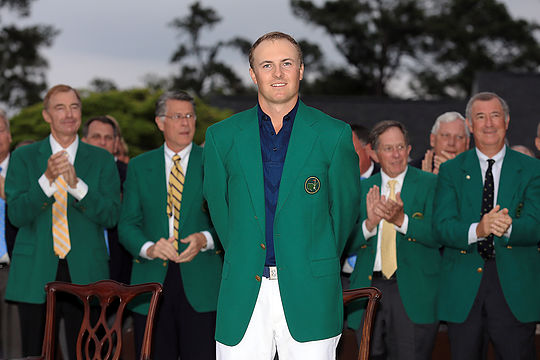 Daylight was a distant second as the quietly-spoken Dallas-born golfer broke record after record on what is already being labeled ‘Spieth Sunday’.

Spieth became the first Masters player in 39-years since Raymond Floyd to lead from start to finish.

However it all began on Thursday with becoming the youngest 18-hole leader and also the second lowest first day front-runner in the 79-history at Augusta National.

On day two, Spieth tied the Major Championship opening two rounds record with a 130 tally that was also a new Masters opening 36 hole low with scores of 64 and 66

Then on day three Spieth’s 16-under par 200 was the lowest 54-hole total in Masters history.

What’s in The Bag

However Spieth did leave the door ajar, albeit it slightly late on Saturday, for his rivals having seen his a 52-hole six-shot lead cut to four when he doubled the 17th.

Justin Rose, who went into the last day alongside Spieth, got as close as three shots when Spieth bogeyed the fifth.

But that’s as far as the Texas Rangers baseball-loving Spieth allowed his rivals relegating them again to back row seats.

As Spieth crossed the ‘Hogan Bridge’ to the 12th green, and named in honour of fellow Texan Ben Hogan, Spieth enjoyed a six shot lead with seven holes to play.

But after dropping a shot at ‘Golden Bell’ Spieth pulled off one of his best shots over the four rounds eagerly urging on his second into ‘Azalea’, clearing Rae’s Creek and the par five 13th to regain the dropped shot and get back to 18-under par.

Spieth then carved out yet another slice of Master history holing a 10-foot birdie at the 15th to become the first player ever at Augusta to move to 19-under par.

When he got to 18-under he tied Woods but at 19-under the Lone Star superstar was all on his lonesome.

However that script was hardly spoilt when Spieth failed to get up-and-down at the last in taking a bogey to be tie Woods with the Masters record of 18-under par.

“It was very nerve-wracking today as I thought it might be easier having played a round with the league but it wasn’t,” said Spieth.

“I didn’t sleep a lot last night, with two major champions behind, I could’t let up. It’s been the most incredible week of my life. This is as great as it gets in our sport, a dream come true for me.”

“I didn’t break 70 last year even having a chance to win, shooting such low rounds was remarkable.”

“But to see all my family and friends up the last and at that point I knew it was going to be a done deal, to be honest still hasn’t kicked-in. I am still in shock a little bit.”

“My family haven’t been there when I have won before so to be at this one is special.”

“I now want to be like Bubba (Watson) as I want to win two Masters and I’m excited already to come back, for this year being Masters champion and all that brings with it.”

“I know what a heavy weight it will bring but ready for it, I’m sure I will figure it out.”

Spieth has now won three times in his past 10 tournaments starting with victory last December in far off Sydney at the Australian Open.

He then crossed the International Date Line to storm to success a week later in the Woods hosted Hero World Challenge.

The young Texan kick-started 2015 with three top-10s in his first four PGA Tour events before capturing a second PGA Tour title with a play-off victory in the Valspar Championship.

Spieth returned home to the Tour’s ‘Texas Two-Step’ finishing runner-up to fellow Texan Jimmy Walker in the Valero Texas Open before just missing out in a play off for the Masters curtain-raiser in the Shell Houston Open.

And despite his last hole bogey there was emotional scenes at the 18th green with Spieth greeted his parents and brother but with Spieth devoting his victory to his beloved 13-year ‘special needs’ sister, Ellie.

Now at 21-years of age, Spieth is exempt to compete at Augusta for as long as he desires.

Three-time Masters winner Phil Mickelson (69) shared second place with Rose (70) at 14-under par and with World No. 1 Rory McIlroy grabbing his best Masters result of fourth courtesy of birding the last in a round of 66.

And despite his own disappointment in now having to wait another 12 months to the chance of a career Grand Slam, McIlroy was full of praise for Spieth.

“I played well and I’m very happy with how the weekend went, and even the last nine holes of Friday, which I needed to just get in for the weekend,” said McIlroy.

“I am happy with how I played, obviously going to take a lot of positives from this week. If someone had told me I’d finish 12-under at the start of the week, I would have taken it and sat back and seen where I finished.”

“But a few guys have just played a bit better than that. Jordan obviously started off fantastically well, and has just kept his foot down, and really impressive.”

“What he’s done is very, very impressive and I am fortunate enough to have felt something similar when I won at Congressional so it’s a special time for him to walk up the last hole and enjoy the occasion and let it all sink in.”

“It’s not a feeling many people get especially in winning your first Major Championship. That guy (pointing to Tiger Woods) had it here in 1997 and I was fortunate enough and now Jordan is fortunate to experience it.”

“I am very happy for him as he’s been playing great and for a 21-year old he is far more mature than me than when I was 21-year.”

Jason Day finished the best of the Aussies in a distant 28th place following a final round 3-over 75.

Adam Scott and John Senden were T38 with Geoff Ogilvy the last of the Australians to make the cut in outright 48th at 3-over.