New Zealand’s Steve Alker has narrowly missed winning yet again on the PGA Champions Tour going down in a three-way playoff to American Scott Parel in the inaugural ClubCorp Classic on Sunday.

The trio finished regulation play at 11-under-par with Parel closing with a 65, Gene Sauers firing a 63 and Alker a 68. 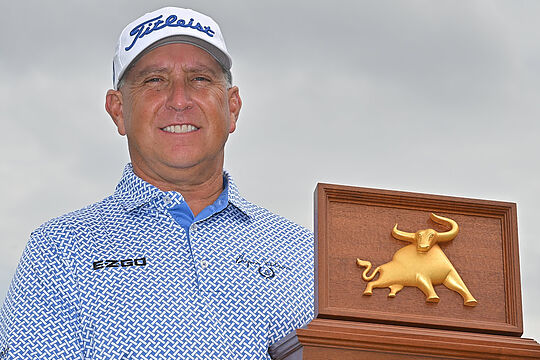 On the first playoff hole, Alker had a long iron in the rough but his approach came out short and into the water. He took a penalty drop and could not get up-and-down. Parel meanwhile was able to secure par and with Sauers in trouble, secured the win.

“I’m glad to win a playoff,” said Parel. “I was fortunate that both the guys didn’t hit the best second shots. I was just trying to get it over here and try to get up and down, which in the end turned out to be the right play.”

If there was any consolation for Alker, his runner-up prize money has moved him to second spot in the Schwab Cup rankings with a tidy US$710,961 and just US$28,000 behind the current top-order ranked holder, Miguel Angel Jimenez who has banked US$738,914.

The Champions Tour heads to Texas for the Insperity Invitational at The Woodlands Country Club later this week.