It continues to be one of the most incredible runs in golf in recent times. Sure, it’s not the PGA Tour but Steve Alker’s red-hot streak since first hitting the Champions Tour last year is what dreams are made of.

The 50-year-old Kiwi closed with four birdies and an eagle in his final eight holes to card a 6-under 66 to win the Insperity Invitational for his second victory and fourth top-2 result this year after losing in a playoff last week. 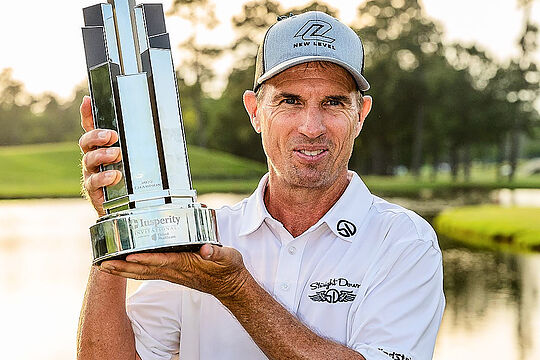 “It’s been a fun ride,” said Alker about his streak. “I’m just happy to be out here. Everything has come around. I’m enjoying my game. Everything is a lot of fun.”

Alker entered the final round in a three-way share of the lead alongside Brandt Jobe and Steve Stricker, who was returning to tournament golf for the first time in six months following a long stint in hospital with a mystery illness.

Both Stricker and Jobe were unable to get their games going, each closing with 2-under 70 to finish four shots behind the New Zealander.

Alker’s win moves him to the top of the Charles Schwab Cup standings with a first prize cheque of $345,000. In 17 starts on the Champions Tour across the past nine months, Alker has 10 finishes inside the top five and 14 inside the top-10.

Stuart Appleby finished the best of the Australians in 14th place on 6-under with Rod Pampling another two shots back in a share of 25th.