New Zealand’s Steven Alker has topped off an incredible 15 months on the Champions Tour after winning the season-long Charles Schwab Cup on Sunday.

Alker was almost pipped at the post by a fast-finishing Padraig Harrington, who won the Charles Schwab Cup Championship, while Alker had to settle for outright third. 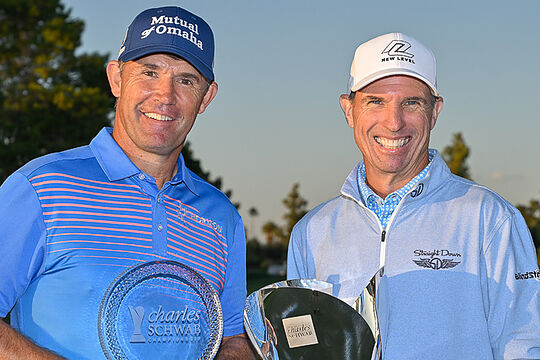 However, Alker did enough in the Charles Schwab Cup race this year including four wins, four runner-ups and five third placings to finish with 4,173,435 points to deny Harrington, who closed out the season on 4,015,455 points. Jerry Kelly finished a distant third on 2,570,225.

It’s hard to believe what New Zealand’s Steven Alker has achieved on the Champions Tour in such a short space of time.

Just three weeks after turning 50 and without any status, the journeyman decided to try his hand at Monday Qualifying at the 2021 Boeing Classic — it was quite literally a decision that changed his life.

The Kiwi would qualify that week and go on to finish in a tie for 7th, which in turn would earn him a start at the following week’s Ally Challenge, where he finished in outright third. It was to be the start of an incredible run that included six consecutive top-10’s and a spot in the Charles Schwab Cup and victory at the 2021 TimberTech Championship.

2022 saw a further four titles, 18 top-10’s and over $3.5 million in prizemoney and a sizeable chunk more than he made in the past two decades on the Korn Ferry and PGA Tours. Alker also earns an extra US$1 million in bonus money for winning the Schwab Cup title.

“Just a lot of hard yards…I’ve played everywhere and I think that kind of helped today in a way just playing the PGA Tour and Australasia and Asia and Korn Ferry,” he said. “I’ve played everywhere. It’s been an amazing journey and just to be here and to have this opportunity has been amazing.”

Rod Pampling was the only other Australian in the limited-field event and finished in 25th place.