Red-hot Cink claims second win of the season at RBC

It’s often said that you don’t win a golf tournament on Thursday and Friday but you can certainly can lose it.

Stewart Cink’s back-to-back opening rounds of 8-under 63 challenged that theory, shattering the event’s 36-hole scoring record set by none-other-than Phil Mickelson (2002) and Jack Nicklaus (1975) to take a handy five-shot lead into the weekend.

The 47-year-old then added a 69 on Saturday for the 54-hole-record and a final round 70, which was enough for a four-shot win over Harold Varner III and Emiliano Grillo at the $7.1 million RBC Heritage.

This is Cink’s third victory at this tournament. He won his first title at Harbour Town Golf Links in 2000 when it was known as the MCI Classic and then again at the 2004 MCI Heritage.

Sunday’s win marks his 8th title on the PGA Tour and a second trophy for the year after capturing the Safeway Open in September 2020. It’s the first time he has claimed multiple wins in a season since 2004. 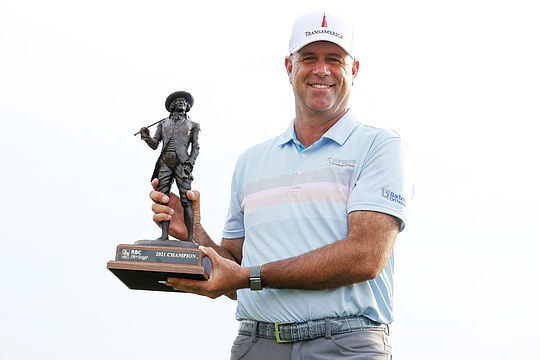 “It was just a really good, solid week all the way through. It was pretty spectacular the first two days, just like I could do no wrong, and then the weekend was just — it was just a bunch of solid hitting, nothing exciting but enough,” said Cink.

“The best thing here this week to make it more special or differently special than other tournaments was the fact that it happened at my age and with Reagan [his son] caddying and Connor [his son] and his fiancé and Lisa [his wife] were all here; several of my friends came down just to be here for this.”

“To have a posse like that waiting at the end to celebrate with is just — it’s just an experience that you just don’t get to have in your life that often, and I’m very fortunate to be one of the people that got to experience that.”

What’s In The Bag: Stewart Cink

Reigning PGA Championship winner Collin Morikawa, who played alongside Cink, opened with a birdie but failed to make a move. The 24-year-old signed for a 1-over 72 and share of 7th place with Chris Kirk.

Dustin Johnson’s problems continued with the World No.1 unable to get on top of his game. He recently missed the cut at the Masters and only managed to claw back a top-15 this week thanks to a final round 66.

“The course setup and everything, it’s in really good condition, and it hasn’t been too windy. I just feel like I made way too many mistakes. Around here, you make mistakes, they penalise you pretty big,” said Johnson, who will next tee it up at the Valspar Championship.

Cameron Smith got off to a red-hot start at Harbour Town thanks to an opening round 9-under 62 before the Queenslander fell away over the next two rounds to take a share of 9th place.

The only other Australian in the field, Cameron Davis, moved up 11 places thanks to a Sunday 68 and finished the tournament in equal 25th.

The PGA Tour now moves to New Orleans for the Zurich Classic, where Cameron Smith won the teams title with Jonas Blixt in 2017.