Andrew Dodt will take a two-shot lead into the weekend at the Australian PGA Championship after firing a brilliant 67 on day two at RACV Royal Pines Resort.

The Australian signed for a 65 on Thursday before the storms arrived to take the overnight lead but was joined at the top of the leaderboard by Ashley Hall and Harold Varner III as the first round concluded on Friday morning.

Hall then carded an impressive 69 to set the clubhouse target in round two but Dodt posted the low round of the day to get to 12 under and take the lead into Saturday.

World Number Seven Adam Scott came home in 32 to sign for a second consecutive 68 and sit at eight under alongside New Zealander Ryan Fox, a shot clear of Varner who signed for a level par 72.

A 65-67 start to the season represents a welcome return to form for Dodt – who made just seven of 20 cuts in the 2016 season – as he goes in search of a third European Tour title. 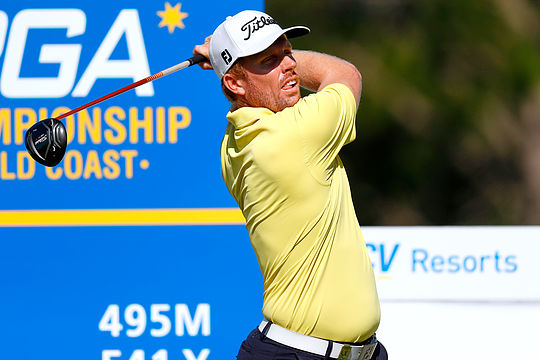 “It was pretty tricky this afternoon with the breeze. The back nine it died down a little bit. It was just a really solid day’s work.”

“I’ll take it one shot at a time, one hole at a atime. I’m really happy with where I’m at mentally, I’ve just got to keep doing what I’m doing.”

Hall made birdies on the 12th, 14th, 15th and last in his remaining seven holes while Varner’s birdie-birdie finish in his first round saw him also join Dodt at the top of the leaderboard.

Hall added a hat-trick of gains from the 13th and when he made another birdie on the third, he was four shots clear.

A triple-bogey was to follow on the next, though, as he found the water and missed a short putt before recovering with birdies on the fifth and eighth.

Dodt was among the later starters but he soon set to work reeling in his countryman and made birdies on the third, eighth and ninth for the second day in a row before adding further gains on the 14th, 15th and 17th.

A closing three-putt bogey took some of the gloss off the round but Dodt can still be happy with a satisfactory first two days.

Scott made a slow start as he bogeyed the second but he got back level on the ninth and that proved a catalyst as he came home in 32 adding birdies on the tenth, 12th, 15th and 16th.

Fox turned in 36 from the tenth but then rattled off four birdies in a row from the first before registering a third bogey of the day on the sixth.

Varner battled back from back-to-back double-bogeys on the 15th and 16th with three birdies in his last five holes to sit a shot ahead of John Senden and Julian Suri.