(Erin Hills, Wisconsin:) American glamour golfer Rickie Fowler and England’s long-haired Tommy Fleetwood brought the Erin Hills monster to its knees with a respective 65 and 67 on day one of the US Open.

Fowler’s round of a seven under tied the lowest score to par set by Jack Nicklaus and Tom Weiskopf when they shot 7-under 63 in 1980 at Baltursol in New Jersey. 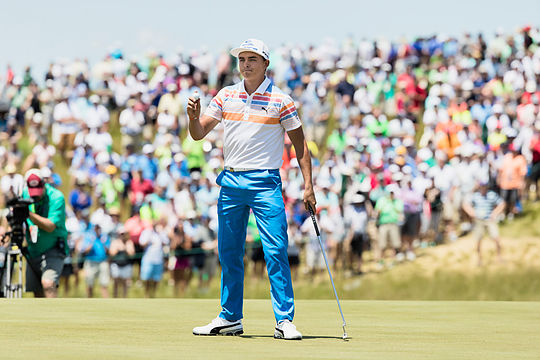 Fellow American Xander Schauffele, ranked a lowly 352nd in the world, had the chance to join Fowler but missed a short putt for birdie on his closing hole in a round of a 6-under 66 to finish tied second with England’s Paul Casey.

Fowler, 28 took full advantage of the bright and earlier near calm conditions to race to six-under through 10 holes and then hold firm as the wind picked up over the exposed Wisconsin layout.

The effort was also Fowler’s lowest score in the event in 25 rounds.

“It was nice and you don’t get many rounds at the US Open that are stress-free,” said Fowler.

“I just did a good job, knew I needed to drive it well, and from there just able to manage hitting and continuing to swing well and hitting good shots and rolling a couple in.”

“So, simple day when you look back on it, and how we kind of pieced our way around the golf course. Kind of, yeah, a lot easier said than done.”

Also muscling his way early onto the first page of the leaderboard was Lee Westwood signing for a three under 69.

However, at 44-years of age the former World No. 1 is again fighting to shrug off that most unwanted tag in all of golf.

“I played great and only missed one fairway, one green and that was the double bogey,” he said.

“My short game was great at Wentworth but my ball-striking is really coming back to its best now and if I keep going then there’s no reason I can’t be in contention on Sunday. I played great in practice, really did, and it carried over.”

“So, not surprised that seven-under is in, no. There’s plenty of room out there, plenty of opportunities, I think it’s very fair. Any course will set up well, though, the way I played. But this course will get progressively trickier, particularly as it dries out.”

The news was not so good for the small Aussie field with Marc Leishman the only player to be in the red on day one.

Leishman fired a superb 4-under 68 to sit in a clubhouse tie for 5th at the end of his round.

Adam Scott is at 2-over with a handful of holes to play while world number three Jason Day is having a day he will hope to forget. The Queenslander sits in 151th place at 7-over after 14 holes.