The season’s fifth and final major gets underway tomorrow night with the British Women’s Open from 19-22 August at Carnoustie, Scotland, where the best women’s golfers including Major winners Sei Young Kim, So Yeon Ryu and Jeongeun Lee6, and world number one Nelly Korda head to one of golf’s greatest tests.

Germany’s Sophia Popov will attempt to defend the maiden Major title she won at Royal Troon in 2020. 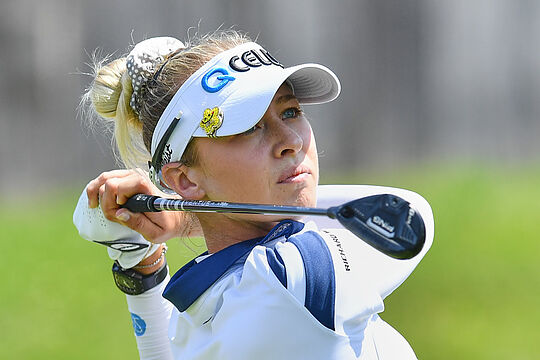 It’s just the second time the world-famous Carnoustie links has hosted the event and comes a decade after Yani Tseng successfully defended her title, beating Brittany Lang by four strokes.

The field is made up of 120 players but Nelly Korda arrives in Scotland as the clear favourite to win her second Major and her fifth title of the year.

The 22-year-old, who took the gold medal for the USA at Tokyo 2020, won her maiden Major title at the the KPMG PGA Championship in July. Korda, who was also third in the ANA Inspiration earlier this year, has finished in a share of 9th and 14th in her last two visits to the British Women’s Open.

With 8,000 fans allowed to attend each day following support from the Scottish Government as part of its Events Gateway Process, this major promises to be a classic showcase of golf on arguably one of the best and most brutal layouts in the world.

Eight Aussies are in the field headed by Hannah Green and Minjee Lee and they both will be looking improve on their efforts last week at the Scottish Open where they missed the cut.

Katherine Kirk, Kirsten Rudgeley, Whitney Hillier, Su Oh, Sarah Kemp, and Steph Kyriacou are the other Australians in the line-up.

The Western Australian has finished no lower than 11th on each of her last three visits to the British Women’s Open, so golf’s newest major winner will be expected to challenge again at Carnoustie.

First established in 1976 and now owned by The R&A, the Women’s Open is one of five Major championships in women’s golf. Each year 144 players compete for the championship trophy with the low amateur, who plays 72 holes, awarded the Smyth Salver.