After grinding through two full seasons on the PGA Tour without a win, Xander Schauffele has now racked up his third title of the year and his second consecutive Tour win at the Genesis Scottish Open.

Schauffele, who also defeated a world-class field at the 36-hole JP McManus Pro-Am in Ireland last Tuesday, sat in a share of 69th place following an opening round 2-over 72 and looked in doubt to make the cut. But the 28-year-old was able to turn around his fortunes with a superb 5-under 65 to move into a share of 4th place heading into the weekend at the Renaissance Club.

A third round 66 saw Schauffele take a two-shot lead into Sunday and a final even-par 70 was enough to hold off fellow American Kurt Kitayama by a shot on 7-under. The new World No.5 earned €1,378,000 for his efforts and moves from 8th to third place on the FedExCup standings behind Scottie Scheffler and Sam Burns.

“I’m playing some of the best golf of my life and capitalising on playing really well. There’s a lot of times all the top players, any player plays professionally plays very well but they don’t get everything out of it and I feel like I’ve been successful in getting the most out of my game,” said Schauffele, who heads to the 150th Open Championship as the hottest player in the field. His previous best finish, and only top-15 result at the tournament, came in 2018 with a tie for second.

“It’s great to win the first event that’s co-sanctioned between the two tours. It was an incredible week…what an honour to win in the Home of Golf.”

The Genesis Scottish Open is Schauffele’s seventh PGA Tour win and is his most successful year in terms of number of wins following his two-victory seasons in 2017 (Greenbrier Classic, Tour Championship) and 2019 (WGC-HSBC Champions, Sentry Tournament of Champions). 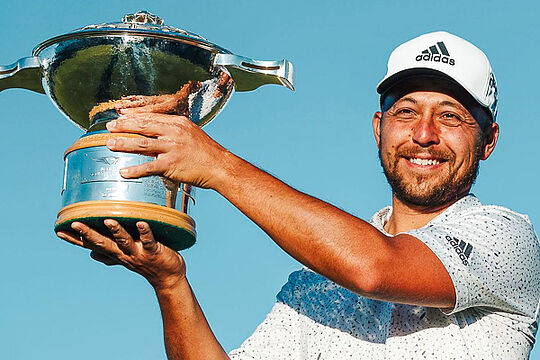 South Korea’s Joohyung Kim claimed outright third on 5-under while Schauffele’s Zurich Classic-winning partner Patrick Cantlay rounded out the top-5 alongside Tommy Fleetwood on 4-under.

Cameron Smith was the best of the Aussies in a share of 10th place on 2-under with his 5-over 75 on Friday, in an otherwise solid week, proving very costly in the final wash-up.

Jason Scrivener was another shot back in 16th place moving up 21 places on Sunday thanks to a final round 65.

The PGA and DP World Tours now head to St Andrews’ Old Course for the 150th Open Championship where Tiger Woods will be returning to major golf for the first time since his withdrawal at the PGA Championship in May. Woods won two of his three Open titles at the Home of Golf in 2000 and 2005.