Adam Scott trumped his rivals winning the WGC – Cadillac Championship winning in a manner he described as ‘ugly but good’.

Scott, the brilliant winner of last weeks’ Honda Classic, went into the final round on the Blue Monster course in most minds an after thought given Rory McIlroy led by a commanding three shots in the first major showdown among the world’s best this season.

And while Scott birdied the first to get within two shots of the four-time Major winning McIlroy, the Australian’s chance of winning back-to-back for only a second time in his career faded horribly when he doubled the third and took a similar double bogey at the fifth hole.

As Scott walked down the sixth he was, in fact, six shots off the pace.

Scott mounted a counter attack first in birding the sixth hole and then muscling his way back into contention with three birdies in succession from the 10th hole.

The 35-year old then went into the lead at 12-under par when he managed the seventh birdie of his round at the 14th hole.

Scott parred the next three to head to the last still enjoying a one shot lead before sending his final drive way right of the fairway and with his ball landing nearly behind a palm tree, but not totally blocked out in playing approach.

However that approach shot hit the left bank of the hazard guarding the green and very luckily to rest on the grassy slope just inside the hazard line.

After much deliberation Scott played a superb chip shot to just over two metres before the joy of seeing his par putt drop in a back nine score of 32 – five shots fewer than his outward half of 37. 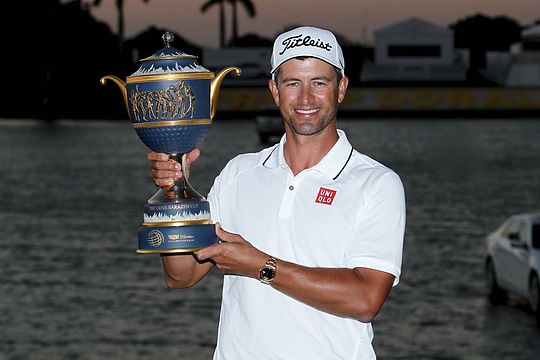 “I really can’t believe it,” was Scott’s reaction.

“I don’t think I’ve processed what’s happened, especially today’s round. It was ugly and good, all in 18 holes. So it just feels great to win my second World Golf Championship.

When Scott speaks of playing ‘ugly but good’ a check of his four rounds reveals one eagle, at the 10th hole on day one, 22 birdies but then also eight bogeys and a pair of double bogeys on the last day.

“It’s just bizarre because I hit some horrible shots today (laughing),” he said.

“I think you have this picture in your mind that you’ve got to play so beautifully to win all the time, and sometimes, especially at a golf course like this, in windy conditions like this, it can’t be that pretty unless you play one of the rounds of your life.”

“It was hard for everyone out there, and I told myself that a couple times out there today.”

“But yeah, I mean, look, I’m really proud that I was able to come back when it wasn’t feeling good after five holes and the swing had not felt good the whole weekend at that point, and managed to find my rhythm again in these windy conditions. All of a sudden it felt a little easier on the back nine.”

The win is Scott’s 13th PGA Tour victory title and his 28th worldwide.

He is the second Australian to win back-to-back on the PGA Tour in some seven months after Jason Day captured a first Major winning the PGA Championship and teed-up in New Jersey a fortnight later to be handed the Barclay’s Championship crown.

And in his first three starts of 2016 Scott has finished T2nd at the Northern Trust Open and now two wins in succession. He was handed a first prize cheque of US$1,098,000 that has seen him jump from 3rd to 1st place on the FedExCup Points table.

And Scott has moved to 7th overall on the PGA Tour list of leading career money winners with earnings of US$42,807,236 – by-passing David Toms and Sergio Garcia along the way.

Scott had moved to World No. 9 in capturing last week’s victory at PGA National and his success just over an hour’s drive south to suburban Miami will see him jump to World No. 6.

And it prompted the question if Scott can see himself getting the better of golf’s ‘Twenty something stars’ and get back to World No. 1 and a position he enjoyed in July 2014.

“I set myself a mini-goal starting the year or back end of last year was to try and get back to world No. 1,” he revealed.

“I think it’s a fair goal, because I’ve been there before, and if you get to that point, I think I’m going to achieve what I want in the game. So that’s probably a bit of a long-term goal. I wasn’t thinking I should just get there by, you know, September this year or something.

“Over the next couple of years, give myself a chance to play consistently well and move back up there and get back to No. 1 and hopefully some wins and another major and another major comes along in that time. But it would be amazing to get back there,”

World number two Jason Day finished at even par and in a tie 23rd.

Bowditch has the dubious honour of becoming the first player in World Golf Championship history and the first on the PGA Tour to fail to break 80 in four rounds since 1983.

His score was so bad that a young volunteer who was tasked with following Bowditch around with a portable scoreboard was told not to post any numbers, and no one questioned that logic.

“I think there was four dozen golf balls at the start of the week in my locker, but I’m down to my last one.”

The double PGA Tour winner posted eight birdies, including three in succession mid-round on day two, but then he also recorded 14 bogeys, 3 double bogeys, 5 triple bogeys, 1 quadruple bogey and a ’10’ at his fifth hole on day two.