Australia’s Todd Sinnot struck up the most unlikely of partnerships with his local caddy by carding a flawless seven-under-par 65 to bring himself closer to securing his Asian Tour card at the Asian Tour Qualifying School Final Stage on Thursday.

Despite their language barrier, Sinnot still received sound advice from his caddy to post a two-day total of 15-under-par 129. The Australian went on a birdie blitz with seven birdies including five in his inward-nine and has remarkably only dropped one shot in two rounds at the Suvarnabhumi Golf and Country Club. 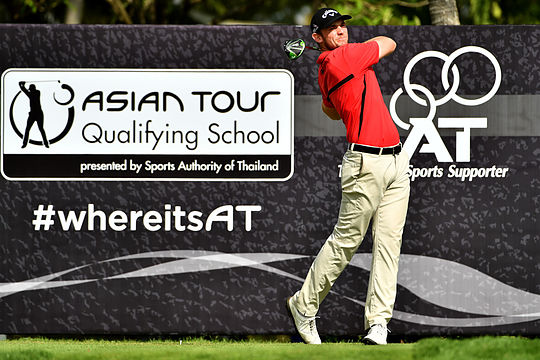 “My caddy is really cool and she’s making me laugh quite a lot which is good. She doesn’t speak much English and I don’t speak any Thai but we are always laughing and joking and trying to stay as relaxed as possible. Body language is a big thing as we are trying really hard to understand what each of us is saying. It’s quite funny,” said Sinnot.

“I didn’t perform as well as I would like to in my last few events in Australia. So I had a little break over Christmas and I feel refreshed and I’m enjoying my golf now which is nice. I’m just trying to stay as relaxed as possible and the last two rounds are probably the finest I’ve had in a while.”

“I’m staying with Jack Wilson this week and we’re really having quite some fun together with the other Aussie guys. So it has been a fun week.”

With the field being cut to the leading 100 players and ties after 36 holes, Sinnot will head into the final two rounds in pole position alongside Japan’s Junya Kameshiro and compatriot Richard Green.

“I had a nice couple of days and I’ve been hitting it good and putting nicely. It’s a foot into the door and that’s what you always aim to do each time you play. I need to work hard again tomorrow and keep putting myself into position. I try to keep myself where I am and try to finish off the week in the number one spot,” said Green.

China’s Zheng Ou-yang also navigated his safe passage into the last two rounds after returning with a 66. The Chinese failed to make the grade in his first attempt at the Asian Tour Qualifying School last year and is hoping to make amends after easing past the cut which was set at four-under this week.

Thailand’s Chanachok Dejpiratanamongkol emerged as the leading Thai in fourth position after signing for a 63 which was also enough to see him make the cut for the first time after two previous attempts.