American Doc Redman has stormed home to win the 117th US Amateur Championship at The Riviera Country Club. Redman made an eagle and a birdie on the 35th and 36th holes, then added a conceded birdie on the 37th hole to defeat fellow countrymen, Doug Ghim.

The final was another classic match play encounter headlined by brilliant shotmaking and putting from both Redman and Ghim, with neither player holding more than a 2-up lead.

Redman, who was runner-up at this year’s Western Amateur, losing to Norman Xiong in 22 holes, was ecstatic with the victory and his biggest career win to date.

“It’s incredible to add my name to the list of all the champions and to have conquered arguably the best field in amateur golf in a really difficult grind,” said Redman, 19.

“I beat some of the best players in the world, and I hope that this can catapult me up into that conversation as well going forward.” 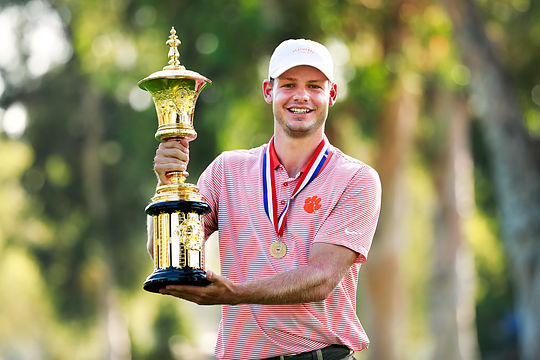 Coming into the championship, Redman, ranked 70th under the R&A World Amateur ranking, had secured a number of top-10 finishes in the Northeast Amateur and Southern Amateur. He was competing in his 4th USGA championship having advanced to the Round of 32 in last year’s US Amateur.

The trophy appeared to be in Ghim’s hands yet Redman stormed away on the final holes, with his putting a standout feature.

“I always have a lot of confidence from mid-range,” said Redman. “When I see one go in, I definitely get big eyes and I know that I can make anything. That’s what happened today. It was a really special putting day, obviously.”

Redman also gets a full exemption into the 2018 US Open and the next 10 US Amateurs, and a probable invitation to the Masters along with Ghim.

Of the eleven Australian’s competing at the US Amateur, Travis Smyth was the best going down to eventual winner, Redman, in Saturday’s quarter final.

Shae Wools-Cobb was the best result for the Aussie field going down to 7th seed Mark Lawrence Jr. in the round of 16.

Dylan Perry had another solid performance in a major amateur championship, with the British Amateur runner-up going out in a tense round of 32 match with another American, Collin Morikawa, who had defeated Australia’s Blake Collyer 6&5 in the earlier round of 64.