Reed goes all in on Texas cuisine for Masters menu

The steamed broccoli might not be your ‘cup of tea’.

Yet there was plenty to like about defending champion Patrick Reed’s choice of menu for the traditional Masters Tournament dinner which features all the former champions on the eve of the year’s first major. 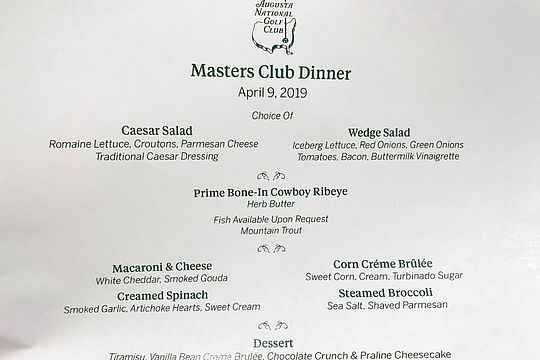 Reed chose prime bone-in Cowboy Ribeye with herb butter as is main course of choice at the Champions Dinner.

And if you weren’t keen on meat you also had the choice of Mountain Trout as an alternative.

The Champions Dinner, held on the Tuesday of Masters week, began in 1952 when defending champion Ben Hogan gave a dinner for all previous winners.

It was then that Hogan proposed the formation of a Masters Club, limited to only Masters Champions.

Honorary memberships were extended to the Masters founders Bobby Jones and Clifford Roberts and subsequently Bill Lane, Hord Hardin, Jack Stephens, Hootie Johnson, Billy Payne and Fred Riley have been added as honorary members of this most exclusive of clubs.

The tradition of what the defending champion chooses to serve is always interesting and when overseas players triumph, their national dish is usually at the forefront of suggestions and yes, kangaroo was mentioned the year after Aussie Adam Scott won his Green Jacket.

Reed’s turn as host saw his menu comprise a choice of Caesar Salad or Wedge Salad, the main course of Ribeye or Trout and sides of Macaroni Cheese, Creamed Spinach Corn Crème Brulee and Steamed Broccoli.

It was a big night for Reed as defending champion he was also presented with an inscribed gold locket in the form of the club emblem as a certificate of his membership.