Queensland based Victorian Heath Reed will lead the John Hughes Geely/ Nexus Risk Services West Australian Open into the weekend with a three shot buffer over the Royal Fremantle field.

In windy conditions that worsened as the afternoon progressed, Reed made the most of four early birdies to stay atop the leaderboard for the entire afternoon. 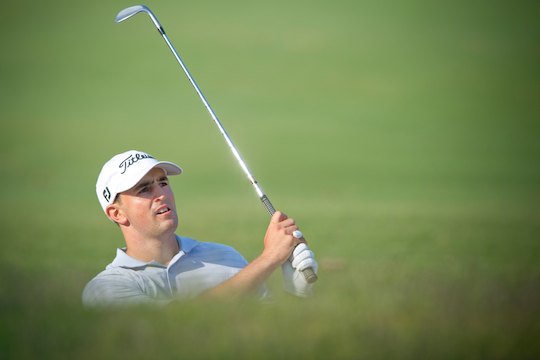 Remaining bogey free for the tournament, the 30-year-old managed to do what few others did – play smart golf and keep out of danger.

“I played terribly last week and I practiced so hard over the weekend my hands are still sore, but it’s paying off now,” said Reed.

“I think I was a bit lucky because I was the first group off in the afternoon and I was 4-under through 8 holes just before the south-westerly started to kick in so the breeze made it a lot trickier to close. I just hung on from there on the last nine holes but it was pretty tough.”

Since joining the PGA Tour of Australasia in 2005 Reed has captured one tour title in the 2008 SA PGA Championship, an event he led wire to wire.

Three years on Reed says he is still more than comfortable leading from the front, he just needs to keep trusting in his game.

“It’s taken me a long time to figure it out but I tend to get less nervous as the tournament goes on. Once I get into contention I have no trouble staying there its more actually getting there.”

“I’m getting confident with what I’m doing and the swing is becoming a lot less of an effort to do so I’ve just got to keep trusting it.”

Reed will head into the weekend three shots ahead of trio Rohan Blizard, Peter Wilson and Ashley Hall who all sit at 7-under par in equal second.

Matt Jager and Ryan Peake sit a further shot back at 6-under par while David McKenzie and Brad Lamb are at 5-under.

Unfortunately 15-year-old schoolgirl Min Jee Lee struggled in the wind and, finishing at 5-over par, missed the 1-over par cut.

In total 62 players made it through to contest the weekend.