(Augusta, GA) It didn’t take long for the mind games to begin between Patrick Reed and Rory McIlroy, who are lying first and second respectively heading into the final round of the Masters tomorrow morning.

Reed snatched two eagles on his way to a superb five-under 67 while McIlroy chipped-in for eagle on the par-5 8th hole in his round of 7-under 65.

Reed leads by three shots on 14-under par as he seeks his first Major Championship in just his 17th major attempt with his best finish coming a tied for 2nd place in last year’s PGA Championship.

McIlroy, of course, is desperate to make amends for his 2011 Masters meltdown where he fired a final round 80 in what is his 10th Masters. A win tomorrow will see the former world number one become just the sixth golfer in the history of the game to win the coveted Grand Slam. 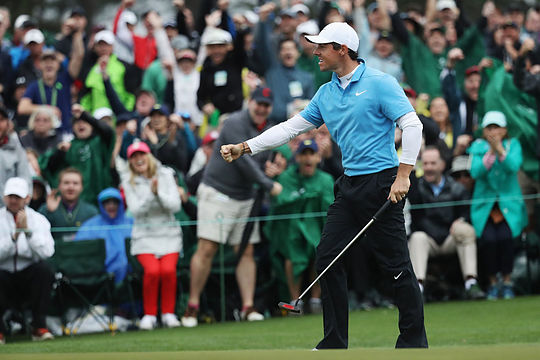 It was McIlroy who took the first shot and suggested all the pressure on the final day of the year’s first Major will be on Reed’s shoulder and Reed, who followed McIlroy into the Media Centre, then suggested otherwise.

“I am leading. I mean, I guess so (laughter),” said Reed in response to McIlroy’s comments.

“But at the same time, he’s trying to go for the career Grand Slam. You can put it either way. I mean, honestly, I woke up this morning, felt fine. Didn’t feel any pressure. Just came out and tried to play some golf.”

“And I believe that’s how it’s going to be tomorrow. Wake up and just come out and play golf and whatever happens, happens.”

While both players will not wish to be drawn into a head-to-head struggle, Reed says he’s actually looking forward to the last day.

“But really, I’m just going to do my thing and stick to my game plan and go out and enjoy my Sunday.

Australia’s chances took a hard knock with Marc Leishman unable to get his round going. The Victorian’s card showed 17 pars and just the one bogey on his way to a 73 and equal 6th place, eight shots behind Reed.

Cameron Smith moved up into a tie for 12th place with a 2-under 70 with Jason Day another two strokes back after signing for a respectable 3-under 69. Adam Scott sits ina. tie for 30th.

Tiger Woods carded three birdies but matched them with bogeys for an even par round of 72 and T40.

While Patrick Reed enjoys a sizeable lead anything can, and does, happen in the final round of the Masters and with six of the world’s top 10 golfers within striking distance Masters Sunday is shaping up to be very special again this year.