Heath Reed has overcome a late rain delay in today’s final round to claim his third Coca Cola Morobe Open, outlasting Jake Stirling in trying conditions over the closing holes.

Reed’s final round 70 to finish on 10 under, was good enough for a one shot win, with Stirling who briefly shared the lead after 10 holes, holding onto outright second. 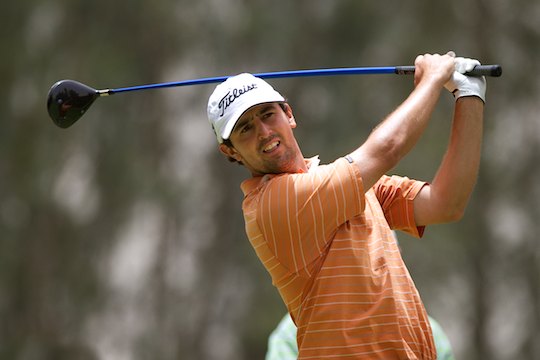 With Reed holding a one-shot lead playing the final hole, both Reed and Stirling had par putts, Reed three feet, Stirling two feet when play had to suspended due to heavy rain causing the hole being covered in water.

It was an anxious sixty minutes for both players before they were able to return to the green, where Reed made no mistake by draining the three foot putt to claim victory.

Reed was certainly pleased with the win, his third at the Morobe Open, though somewhat surprised considering the amount of golf he has been playing over the past 12 months.

“It is a great feeling to win, especially considering there were times when I thought that I may never have another opportunity to win a tournament again,” Reed said after holing the winning putt.

“I have so many happy memories here and I certainly had to draw on those throughout today’s final round. Jake played some great golf and I knew that I could match him as long as I stayed patient.”

“It was a great battle out there today and I really can’t describe the feeling that came across me when that winning putt dropped,” Reed said.

Although disappointed not to win, Stirling was ecstatic with his performance this week at the Lae Golf Club and looking forward to what the future holds.

“This week has been amazing, great people, great course and a great tournament. Although I may not have won today, it has been a wonderful experience and I can’t wait to try and go one better next week.”

Defending Champion Pieter Zwart will return, looking to become the first back-to-back champion, since the tournament became part of the Queensland Sunshine Tour in 1999.

The QLD Sunshine Tour forms part of the Choice Hotels PGA Pro-Am Series which comprises of 200 events Australia and the Pacific Islands.