England’s Mel Reid maiden LPGA Tour victory at the ShopRite Classic on Sunday was timely and full of drama.

A closing 67 that featured a number of clutch moments put Reid two shots ahead of Jennifer Kupcho at 19-under to claim the win with the final round having turned into a shootout between three players looking for their first Tour win. 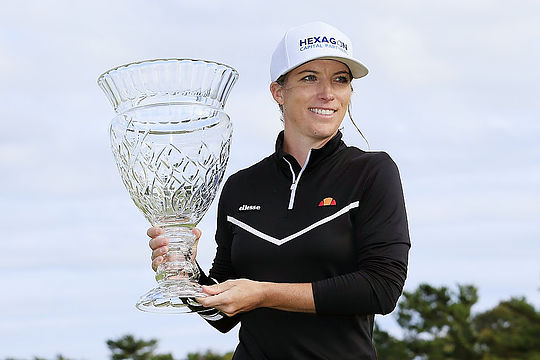 Earlier Reid trailed by one after back-to-back bogeys at the start of her final round did some damage before the 33 year-old regained composure and rattled off four birdies in the span of five holes.

Reid finished in style on the last with an impressive shot from the rough to land within two metres for a regulation par finish and the title.

“You put in so many hours,” said Reid. “So much sacrifice, hard work into this game to have one moment like this. Just so happy that I managed to get it done.”

Reid certainly has played outside her comfort zone on the Ladies European Tour, deciding to pack up everything and head to the US and grind her way onto the LPGA Tour.

Sunday’s victory, after a number close calls, makes it even better.

“I made a huge sacrifice moving to America, leaving my comfort zone, my friends and my family, and it’s paid off. No matter what, people can’t take away the fact that I’m an LPGA winner against a world-class field. It just goes to show you just got to keep going.”

Reid turned professional in 2007 and it took her ten years to earn her LPGA Tour Card and then three more years to claim a victory. It was not that Reid had been winless either, having won six times on the Ladies European Tour

Having moved to south Florida two years ago, her initiation as an LPGA member, was not all smooth sailing but a tie for third at last year’s KPMG Women’s PGA at Hazeltine earned her US$225,038 to move to 61st on the LPGA money list, securing her status for 2020 and now 2021.

As an amateur she won several events including the 2004 and 2005 English Girls’ Championship, the 2006 and 2007 Helen Holm Trophy, the 2007 St Rule Trophy, and the 2007 Ladies’ British Open Amateur Stroke Play Championship.

Reid played on the Great Britain and Ireland team in the 2006 Curtis Cup and was also the low amateur at the 2007 Women’s British Open with a T16 finish.

Following Sunday’s win, Reid has risen to 35th in the world rankings, her highest position since 2011.