Tiger Woods has now firmed as very much the favourite to capture a 15th major next month after leading from start-to-finish to capture a seventh WGC – Cadillac Championship in Miami.

Woods was hardly challenged over the four days on the Trump Doral course posting rounds of 66, 65, 67 and a last round 71 for a 19-under par tally. 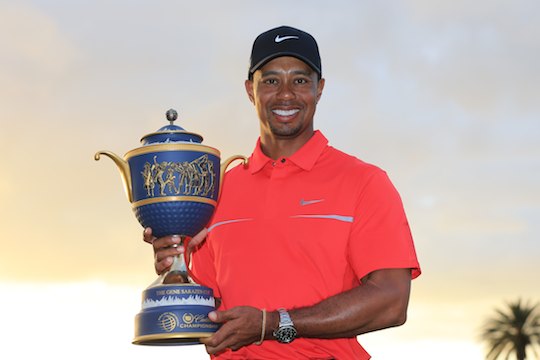 It was Woods’ 17th WGC title in the 14-year history of the events and that’s 40% of the all individual stroke-play WGCs.

As well, it is Woods second win this year, and his fifth PGA Tour success in his last 19 starts.

Of special note, it is Woods’ 76th PGA Tour success in being handed the Gene Sarazen trophy.

“I played well this week and thank you to Steve for the putting lesson,” said Woods.

“It was one of those weeks where I felt pretty good on how I was playing and I made some putts, and pretty much got it rolling.”

And Woods continues a remarkable record of having now won every tournament he’s contested when leading by three shots or more heading to the last round.

Woods also has now banked more than $24 million from his WGC wins that would place him 28th on the all-time PGA money list in WGC wins alone.

The 37-year old Woods recorded 27 birdies over the four days including a career best of 17 over the first two rounds.

And who finished second?

Well, it was good friend and Ryder Cup colleague, Steve Stricker the player Woods had singled out on the opening day as being instrumental in ‘correcting’ his putting set-up.

Stricker carded a last day 68 for a 17-under par tally.

And Stricker was the first to single out Woods for special praise.

“It looks like he’s going to clip my by two shots but it’s the nature of the game as everyone helps each other out here. The older players were helpful to me.”

“You’re friends out here, and even though you are competing against each other you still like to help each other out.”

Northern Ireland’s Graeme McDowell let slip third place in taking a double bogey at the last in a round of 72 to share third place on 14-under par with Phil Mickelson (71), Sergio Garcia (69) and Australia’s Adam Scott who shot the best round on the last day, a 64.

World number one, Rory McIlroy, shot his lowest score all season, a seven-under par 65, and declaring a ‘significant increase’ in his game at the conclusion of the WGC – Cadillac Championship.

What’s In The Bag?