Finishing the regulation rounds at 16-under along with Englishman David Skinns and Chinese Taipei’s Kevin Yu, Ridings secured his victory on the second playoff hole with a par after extending the playoff with Skinns after a clutch four metre birdie putt on the first. 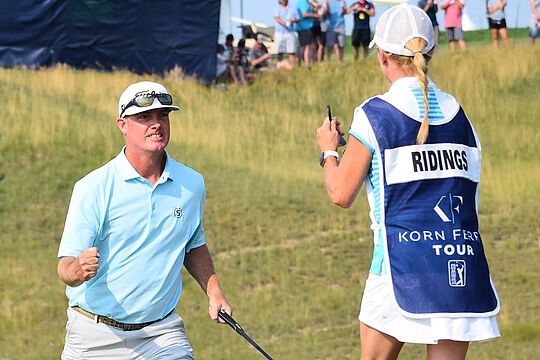 The victory moves Ridings from 138th to 69th in the 2020-21 Korn Ferry Tour points standings, putting him inside the top-75 on the Korn Ferry Tour Finals standings. It also marked Ridings’ first top-five finish in a PGA Tour sanctioned event since a tied 3rd at the 2017 Barbasol Championship.

“I haven’t had anything bigger than that in a long time,” said Ridings. “I’ve had some chances on tour, but this one felt bigger than those, just with all the timing and the way my last couple of seasons have gone so slowly, methodically, and not really getting much done.”

“This was huge. Besides that, I wasn’t going to get in (Korn Ferry Tour Finals) if I didn’t win. I’m not even sure that guarantees me.”

Ridings’ only other victory came at the 2002 WNB Golf Classic, formerly a Korn Ferry Tour event in Midland, Texas. He won it in a sudden-death playoff, holing a wedge shot for eagle to defeat Aussie Mark Hensby.

Brett Drewitt finished the best of the Australians in a share of 7th position keeping him inside the desired top-25 in rankings to gain his PGA Tour card.

Drewitt, 30, is currently ranked 23rd on the back of six top 10 finishes this season including a win at the Lincoln Land Championship.

Jamie Arnold was the other Aussie to make the weekend finishing in a share of 76th position.