American Davis Riley won the Korn Ferry Tour’s TPC San Antonio Championship on Saturday, making birdie on three of his last four holes for a closing 67 and a two-shot win over Taylor Pendrith and Paul Barjon.

The victory is Riley’s second of the season, sending him to the top of the Korn Ferry Tour points standings and he is just one title away from an instant promotion to the PGA Tour. 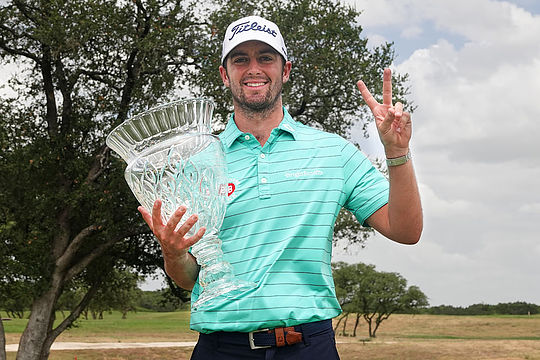 Riley started one stroke off the lead entering Saturday’s final round in San Antonio, and made the turn in 1-under.

At one point he was among a seven-way tie for the lead, before Riley made his move with a birdie on the 15th from a bunker, before hitting his approach on the 16th hole to a metre, setting up another birdie.

He then narrowly missed with his birdie putt on the 17th before making one more on the 18th after hitting his approach on the par-4 final hole to a metre.

“I’m really proud of the way I handled myself,” said Riley. “I give a lot of props to Panama week, being able to pull from those memories.”

There are 11 more events this year on the Korn Ferry Tour and even if Riley doesn’t secure his third win, he’s virtually assured of being among the top-10 in points at the end of the season, guaranteeing him conditional status on the 2020-21 PGA Tour that would make him eligible for events held opposite World Golf Championships and majors.

Ryan Ruffels was the best of the Australians in a share of 18th position with an 8-under-par total. This was Ruffels’ third top-20 finish for the season and moves the 22-year-old from 58th to 49th on the money list.

The former amateur star has made the cut in 8 of the 11 events so far this season to be the highest ranked Aussie on the Korn Ferry Tour. Harrison Endycott finished in a share of 40th position at 4-under.

After back-to-back weeks in Texas, the Korn Ferry Tour heads to the Ozarks for the Price Cutter Charity Championship. The top-75 qualifiers at the season ender will make the Korn Ferry Tour Finals with Ruffels (49th) and Brett Drewitt (66th) currently inside that mark.

Jamie Arnold (79th), Brett Coletta (83rd) and Curtis Luck (107th) will be needing to make a move soon to ensure they qualify.