Former Kingswood Pennant player and Riversdale Golf Club champion, Gunn Yang, survived a nerve racking closing stretch to defeat Frederick Wedel on the 19th to advance to the final of the US Amateur Championship at the Atlanta Athletic Club. 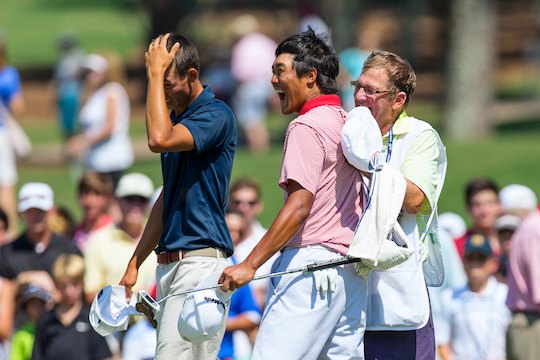 Gunn Yang celebrates with his caddie Richard Grice on the 19th hole of the semifinal round of match play at the 2014 U.S. Amateur (Credit: USGA/Chris Keane)

Yang, now a San Diego State sophomore and making his first appearance at the US Amateur, appeared to have his match in the bag after winning the 17th hole to move to 1-up over Wedel going down the 18th.

The Highland’s 18th hole this week has been changed back to a 458 metre par 5 presenting the ‘risk’/'reward’ option for players of this calibre. During the 2011 PGA Championship it played as a par 4 and produced many a dramatic moment, this week in Atlanta has been no different.

Both Yang’s and Wedel’s drives landed in the fairway bunker about 170 metres from the green.

Yang describes himself as an ‘aggressive’ style of player and pulling for his 6 iron he had the green in his sights and no thought of laying up.

“I just wanted to put more pressure on him, really,” said Yang about his decision to go for the green despite being 1-up going down the last.

It would prove a costly mistake as Yang’s approach found a watery grave.

“I mean, I could have definitely laid up and tried to make a birdie, but Frederick hit his second shot from the bunker to eight feet away. That was pretty close. That could happen at any time. So yeah, I mean, I thought I made the right decision, but it just didn’t work.”

Wedel took full advantage of the opportunity and the match was back to all-square and moving into sudden death extra holes.

Yang then made no mistake splitting the fairway with his driver on the 396 metre par 4 10th after Wedel had elected to use his 3-wood for safety. This time Yang’s aggressive style had reaped the benefit of a short iron approach with Wedel 40 metres back.

After Wedel missed the green, Yang produced arguably the best shot of his career, a gap wedge to 3 feet of the flag. In a space of three shots he’d managed to turn what appeared to be a disaster into triumph.

“I hit a perfect drive on the first playoff hole, and it was like 114 metres out and hit a 54 lob wedge, and it was like one or two feet away, and I just wanted to make that to happen again, really. It was close enough.”

Yang is still riding on a wave of confidence after sending the world number one ranked amateur, Ollie Schniederjans, packing with a 1-up victory in the round of 16 on Thursday. Yang now has this championship firmly in his sights.

“It was the best match I’ve ever had. After his match, it just turned me on, really, because it built me lots of confidence because he’s No. 1 in the world and I beat him by 1-up.”