The Riversdale Cup is not only steeped in history, being Australia’s second oldest amateur championship, but with former winners like Robert Allenby (1990-91), Brendan Jones (1998), Aaron Baddeley (1999) and Michael Sim (2004), Scott Arnold (2008), Jordan Sherratt (2009) and British Amateur champion Jin Jeong (2010), the tournament is the one everyone wants to win.

This year’s 117th championship gets underway on Thursday with an international exemption list including many of Europe’s and Asia’s best with 156 contestants doing battle over a four round stroke format. 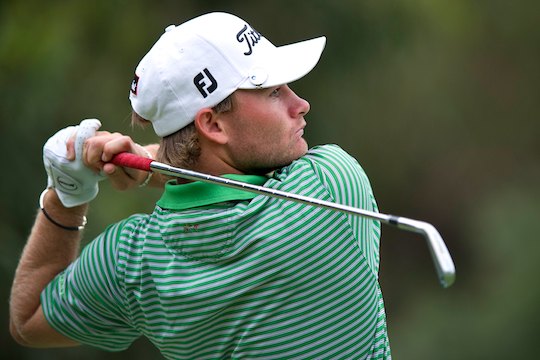 Matt Stieger will be looking to go one better at this year’s Riversdale Cup (Photo: Anthony Powter)

After 36-holes, the leading 50 players and ties – plus nominated players from the State and International teams – will make Saturday’s cut for the remaining two stroke rounds.

At 6027 metres Riversdale Golf Club is not overly long by modern day standards.  The course is presented in raw historic style with wispy rough surrounds, pure greens and manicured fairways.

It’s a layout that rewards the straight hitter who need not be overly long off the tee.

Errant tee shots, especially on the 415 metre par 4, 16th and the 356 metre par 4, 8th holes will be punished and players need to have their putters working to score on the slippery greens.

Birdies will be at a premium as a score of between 15-20 under-par will be required to claim the trophy, depending on the notoriously fickle Melbourne weather.

Last year Nathan Holman won the championship with a game of contrasts.

Holman opened with a sizzling 10-under-par, 62, to equal the course record set by Daniel Beckmann in 2009. His second round became a stark reminder as to how hard this game is, carding a sobering 3-over-par, 75.

A third round even par 72 kept Holman with a share of the lead alongside New Zealand’s Ben Campbell before pipping a determined Matt Stieger following three play-off holes to claim his first main amateur title.

Holman will return to defend his maiden victory against a field that includes the cream of Australasian amateur golf.

Also keep an eye out for emerging players such as Ricky Kato and Jordan Zunic.

During the recent Australian Amateur, Kato and Zunic both upstaged a number of marquee players with stellar match play wins. Kato’s run was only halted in the quarter-final by the eventual winner, Germany’s Marcel Schneider, whilst Daniel Nisbet brought Zunic’s championship to an end in the semi-final.

Geoff Drakeford is another to follow and after winning the Australian Men’s Foursomes championship yesterday with Rory Burke at Riversdale.

Drakeford played well at the Australian Amateur progressing through to the quarter-finals and has produced consistent results recently with a runner-up finish to Todd Sinnott at The Dunes Medal followed by a third place finish at the Port Phillip Amateur and a top-15 at the Lake Macquarie Amateur.