On a day of shifting fortunes Argentina’s Andrés Romero stormed through the field to take victory in great style at the BMW International Open at Golfclub München Eichenried. 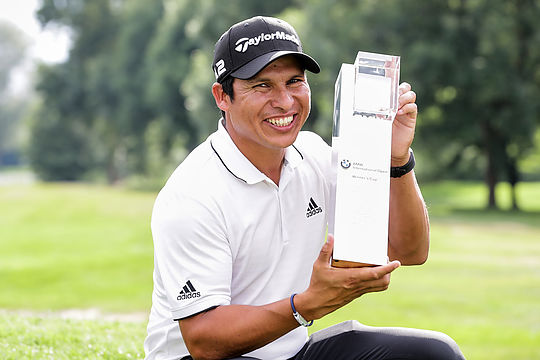 The fact that Sergio García, the Masters champion and tournament favourite, was among the three runners-up spoke volumes for Romero’s achievement. The others were Richard Bland, of England, and Belgium’s Thomas Detry.

“The whole round was very good. I was focussed all day. I didn’t make any bogeys, that is a rare thing for my type of game. The last few holes I noticed I made seven birdies but the whole round was excellent.”

“I was nervous when I got to the 18th green but finally when I was thinking with two putts I could win the tournament, I was really nervous. But hopefully I was going to do a two-putt and now I have my trophy and enjoy this moment.”

Romero, 36, who arrived in Germany on the back of a missed cut at the US Open last week, came into the event ranked No. 837 in the world. He will now climb significantly up the rankings when they are announced tomorrow and can relax in the knowledge that he has won his playing rights on the European Tour until the end of 2019.

García was in a four-way tie for the lead with three holes to play, only to miss a short putt for par and effectively fall out of contention. He needed an eagle at the last to force a play-off but came up just short.

Garcia and Bland both had 69s, while Detry had a 66. Henrik Stenson, one of the favourites, finished in a tie for tenth on 11 under par.

It was also a week that witnessed holes in one at the 2nd for Paul Peterson (USA) and Romero, but that unfortunately secured neither of them the €140,000 BMW i8 Protonic Frozen Black Edition hole-in-one award because the feat was achieved on the wrong hole. The prize was on offer at the 17th.

Brett Rumford was the best of the Australian finishing in a tie for 34th following a disappointing final round 75.

First round leader Wade Ormsby failed to capitalise on his opening round 64 and slipped back to equal 44th following rounds of 64, 74, 73 and 73.

Richard Green (T75) and Jason Scrivener (85) were the only others to make the weekend cut.