Thriston Lawrence held his nerve to win his home South African Open at the Blair Atholl course on Sunday.

Lawrence started the day with a 2-shot lead over France’s Clement Sordet and despite extending his advantage to five strokes early on the back nine, the South African only just managed to hold off his playing partner as he closed with a 2-over-par 74 to finish with an overall 16-under-par. 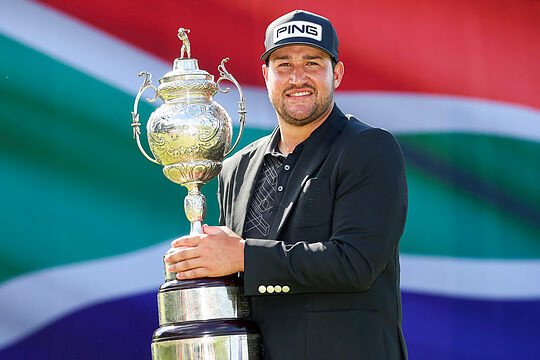 “It felt all easy going through the round and then golf happened at the end,” said Lawrence.

“Clement was playing really well, I was playing well then made a few mistakes, missed them on the wrong sides and couldn’t score from there. I managed to get it done and I’m really pleased.”

The victory is his third on the DP World Tour, following wins at the Joburg Open a year ago and the European Masters in August. He moves to a career high of 64th in the World Rankings.

It’s been a standout year for Lawrence who became the first South African to win the DP World Tour’s Sir Henry Cotton Rookie of the Year award in which he notched up two wins, six top tens while also making his Major debut at the Open Championship at St Andrews.

Sweden’s Jens Fahrbring birdied two of the last three holes to finish a shot behind Sordet in third, with German’s Matti Schmid another stroke back in fourth.