Moules led after the opening day and fired a 5-under 67 in the final round to set the pace at 11-under. He was soon joined by amateur Anthony Quayle and the pair watched on as Queenslander Aaron Wilkin gave up a two-shot advantage with a double bogey on the final hole to set up a three-way playoff. 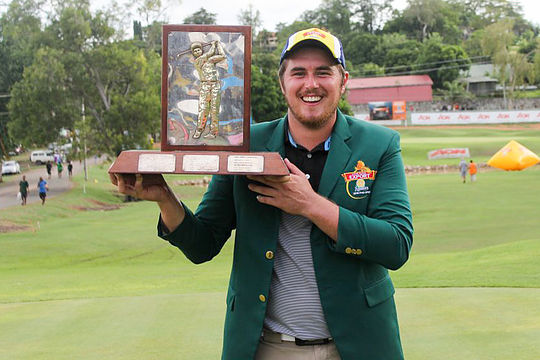 Quayle was the first to bow out before Moules birdied the second playoff hole to claim the biggest win of his career.

“I was playing well all week, even pars in the second and third rounds didn’t get it done but today the putts fell and 5-under was pretty good out there I think,” Moules said.

“I was looking at it and Aaron had a two shot lead on the last, a par-3, and I thought give it to him because he has played well. But that’s golf for you and here I am standing here.”

“The second time round, Aaron hit a quality shot in which made it easy for me because I didn’t have to look anywhere else but at the flag. I put a good swing on it,” added Moules.

“I had that same putt in the main round, so I knew what the line was, I hit it a bit harder and it when straight in.”

With his birdie on the second playoff hole, Moules took out the winner’s cheque of AU$21,000 but most importantly, a two year exemption on the PGA Tour of Australasia which elevates the former Royal Adelaide Golf Club trainee into some of the Tour’s biggest events, including the European Tour co-sanctioned Australian PGA Championship and Fiji International.

“It’s amazing, first year on Tour, only six starts in and I have got the first win out of the way. I am rapt,” added Moules, “It definitely will put me into the big events. If I had finished runner-up I would still be trying to get a start on Qualifying School status.”

“I feel like I can play well in the big events, my finish at the NZ Open showed that, and hopefully I can feature well in the ones at the end of the year.”

Wilkin and Quayle shared runner-up honours while NSW’s Mitchell Brown finished a shot outside the playoff in outright 4th.